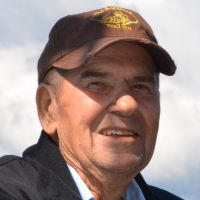 Click Here For DirectionsKenneth Bettcher, 69, of Sheridan, passed away on Monday, September 23, 2013 at his home with his wife by his side.Kenny was born on July 27, 1944 in Burke, SD to parents Alfred and Freida (Hauf) Bettcher. He moved to Sheridan when he was 15 and later married Betty Jean “Jeanie” Rucki on June 1, 1963 at Holy Name Catholic Church. They recently celebrated their 50th wedding anniversary.Kenny worked 28 years for Decker Coal. He built the Big Horn Y Store and after 9 years at the store he enjoyed his retirement, piddling and doing his own thing, yard work, fixing things, but most of all his grandkids. He also liked camping, fishing, the mountains, Deadwood, traveling and vacationing.Kenny was preceded in death by his parents, brothers; David, Dick and Larry, sister, Marlene Donoho and grandson, Justin Samms. He is survived by his wife, Jeanie, children; Kellie (Al) Stover of Hot Springs, SD, and David (Julie) Bettcher of Sheridan, WY, his siblings; Dennis (Janice) Bettcher and Roger (Dixie) Bettcher all of Sheridan, WY, his grandchildren; Treylee Parker, Aspen Stover, Heather Redenbaugh, Christy Gorzalka, great grandchildren; Siena and Silas Redenbaugh. He also leaves numerous nieces and nephews whom he loved.A Celebration of Life will be at 6:00 p.m. on Friday, October 4, 2013 at the home of David Bettcher, Hwy 87, 7 Big Four Road, Sheridan, WY.In lieu of flowers donations can be made to Children Services, Volunteers of America, 1876 S. Sheridan Ave., Sheridan, WY 82801.Kane Funeral Home has been entrusted with arrangements.