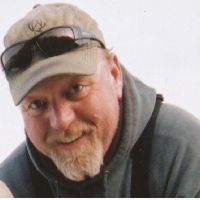 Kirk Dana Grant, age 50 of Sheridan, WY, passed away suddenly on October 17, 2014 from a heart attack while hunting near Lander, WY.

Kirk was born on May 29, 1964 in Waterville, ME to Sandra Jane Couture and Dwight William Grant. He had two half brothers, Josh and Justin Grant. Kirk was married to Donna Denise Roberson Grant on July 28, 1990 in Sheridan, WY. After graduating high school Kirk attended trade school to go on to be a Journeyman Ironworker. He was a member of Ironworker\'s Local 27. Kirk resided in Maine, Salt Lake City, and Sheridan, Wyoming though he spent much of his career in various cities across the U.S. Kirk enjoyed spending time with his family, hunting, fishing, golfing, and watching sports. He was a true outdoorsman.

Services will be held at 10:00 a.m. on Monday, October 27, 2014 at Kane Funeral Home with Pastor Doug Goodwin officiating. A Reception provided by the teachers from Sagebrush School will follow in the Kane Reception Hall.