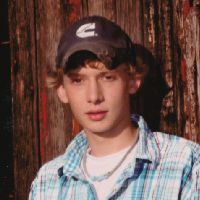 ‍Heaven gained a beautiful angel on February 17, 2015, when Kolter Jonathan Wayde Garner went to be with the Lord.Kolter was born in Sheridan, WY, on April 14, 1997, to Johnie Paterakis and Patrick Garner. He lived in Sheridan most of his life and attended Sheridan schools. He played football, baseball, and basketball. Kolter lived in Billings, MT, for a couple of years attending school there and working part time. In December of 2013, Kolter graduated from the Youth Challenge Academy in Dillon, MT, where his leadership skills were recognized and where he received awards for being an outstanding cadet. Kolter returned to Sheridan upon leaving the Youth Challenge Academy and attended Sheridan High School while living with his aunt Bobbie and uncle Van Wright. He worked for Killy\'s Deli in Sheridan and formed friendships with many of his coworkers. He always had a smile for everyone. Kolter loved being in the outdoors, especially spending time in the Big Horn Mountains and on many lakes and streams in Wyoming and Montana. He reported having a blast on the beach while vacationing in Cancun, Mexico with Van and Bobbie during the Christmas holiday. Kolter enjoyed many hunting, fishing and camping trips with “Papa” John Holwegner, his uncle Van, and other friends and family members. He enjoyed spending time with his family and friends, playing basketball and video games, and listening to his favorite music. Kolter had a large circle of friends and never met a stranger most of whom have a funny story or two about the time they spent with him. He was always there to lend a helping hand to others by listening, and offering advice and he was a great big brother to sisters Kaycie and Joelie. Kolter had a great sense of humor, and liked joking around and playing pranks with family and friends. He will be remembered for his fun, caring, adventurous, and generous spirit.Kolter is survived by his mother, Johnie Garner, uncle Van and aunt Bobbie Wright, sisters, Kaycie Garner and Joelie Thompson, Grandmother, Deb Paterakis, John Holwegner, great grandmother, Lois Bury, and uncle Andrew Smith of Sheridan, WY, his father, John Patrick Garner Jr. of Billings, Mt, great grandmother, Marlene (Gary) King, great uncles Ricky (Stephanie) and Randy (Tina) Paterakis of UT, also many cousins, and his best buddies, Leighton, Ryan, Gavin, Garrett, Sultan and Paul.Kolter was preceded in death by his sister Shealie Jade Thompson, uncle Joseph Paterakis, grandfather Robert Paterakis, great grandfathers John Bury and Victor Paterakis, and great uncles John and James Bury, and grandfather John Garner Sr.A Celebration of Life will be at 2:00 pm on Sunday, February 22, 2015 at Sheridan High School Auditorium with Reverend Kevin Jones officiating.Memorials to honor Kolter may be made to Joey\'s Fly Fishing Foundation, 109 S. Main St., Ste B, Sheridan, WY 82801.Kane Funeral Home has been entrusted with arrangements.

Date:
Start Time:
A Celebration of Life will be held on Sunday, February 22, 2015, at the Sheridan High School at 2:00 pm.
Location:
Tribute VideoService VideoService Brochure