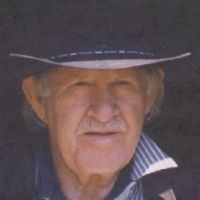 View Service Folder | Click for Video Tribute Larry Ray Doyle, 80, of Sheridan, passed away on Friday, October 3, 2014, at the VA Medical Center in Sheridan. He was born and raised in Sheridan to parents Lawrence (Mutt) and Helen(Knight) Doyle. He proudly played football and basketball for the Sheridan Broncs. In his younger years he also participated in amateur rodeos, wild horse racing, roping and bareback.Larry enlisted in the Air Force when he was only seventeen. While serving in Europe, he met Gwynneth (Jean) Thomas of Cardiff, South Wales, Great Britain. They married in 1956, and together raised three children, Clinton of Sheridan, Raymond of Billings, and Benny of Garryowen. After serving in the Air Force he worked for the O.W. Ranch. He then went to work for the Sheridan VA from 1957 to 1973. He moved his family to Livingston, MT in 1973, where he owned and operated the popular “Sport Bar”. The family returned to Sheridan in the late 70\'s. He spent the rest of his working years doing various jobs that always involved horses.Larry was an enrolled member of the Crow Tribe “Ties of the Bundle Clan”. He participated for many years proudly carrying the American Flag in the re-inactment of Custer\'s Last Stand in MT. He was an extra in four movies, including “Little Big Man” with Dustin Hoffman. In his later years he enjoyed playing the guitar, writing, drawing western art and sculpting.Larry was preceded in death by his parents, sister Donna, an infant son, and wife Jean Doyle. He leaves behind his three sons and five grandsons; Jessi, Preston, Hunter, Reynie and Cody.“Your in God\'s hands now dad. We will miss you”.A Viewing will be held from 6:00 to 8:00 p.m. on Thursday, October 9, 2014 at Kane Funeral Home. A Celebration of Life will be held at 2:00 on Friday, October 10, 2014, at Kane Funeral Home with Chaplan Derek Schultz officiating. Interment will be in the Sheridan Municipal Cemetery with Military Honors. A reception will follow at 4:00 at the Trails End Firewater.Memorials to honor Larry may be made to the Sheridan Dog and Cat Shelter at 84 East Ridge Rd., Sheridan, WY 82801.Kane Funeral Home has been entrusted with arrangements.