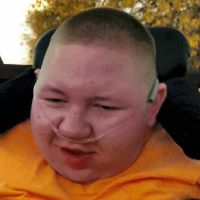 Leif Erik Blomquist was born January 9, 1997, at Sheridan Memorial Hospital, Sheridan, WY. He went to his heavenly home on August 9, 2016, at the age of 19 years, 7 months, after a lifetime of illness.He is survived by his mother, Sonia and second dad Philip Willett of Sheridan, grandparents, Larry and Peggy Blomquist of Newfield, NY, Rick and Louise Beld of Big Horn, WY, Don and Gaye Koski of Sheridan, his family, Alexis Willett of Battleground, WA, Adrienne (Ethan) Olson of Hayti, SD, Marshall Willett, Kellan Willett and Madison Willett all of Hayti, SD, three nieces, many loving aunts, uncles, cousins and friends. He was preceded in death by his father, Gunnar Erik Blomquist, baby sister, Sierra Lillian Blomquist, all of his great grandparents, two uncles, Thomas Whitmarsh and William “Bill” Beld.Our precious Angel, Leif was baptized in the Old Apostolic Lutheran Church, where he remained a life-long member with his simple faith. His God parents were Dan and Tyra Kangas and Reuben and Sheila Malinowski.Leif struggled his entire life with numerous ailments but his spirit was always bright and strong! He so patiently and lovingly ran the race set before him and was a light unto all who knew him. He lived daily with a simple faith and assurance that God would take care of him and a better life awaited him.A Visitation will be held from 6:00 to 8:00 pm on Thursday, August 11, 2016, at the Apostolic Lutheran Church. Services will be held at 1:00 pm on Friday, August 12, 2016, at the Apostolic Lutheran Church with interment to follow in the Mount Hope Cemetery in Big Horn, WY.Memorials to honor Leif can be made to the Old Apostolic Lutheran Church, 111 Metz Road, Sheridan, WY 82801.Kane Funeral Home has been entrusted with arrangements.