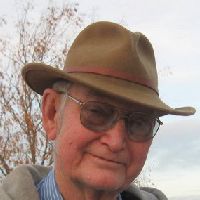 Leonard Allen Davis went to be with his Lord  on the morning of August 23, 2015 at Saddle Ridge Therapy.  Leonard was born on October 10, 1939 to the union of  Hester and Ruth (Baker) Davis in Thermopolis, Wyoming. He grew up in the country doing hard work and in his fun time he and his brother, Keith rode horses and explored the hills.  He learned to be fiercely self reliant and that carried all the way through life.After graduating from high school he came over to the Parkman, Wyoming area and did ranching and haying for several people including Woodson  Moss.  He met May Robinson there who was working as a nanny.  They married and to them was born one child, Rose.  He later decided to learn a trade so he packed up his little family and went to  the Universal Trade School in Omaha, Nebraska.  He and May were later divorced. In 1982 he met and married Diane Sullivan Heezen and she brought three daughters, Catherine, Brenda, and Amanda as well as cats and dogs into that union.  He adored them and welcomed them as his own.  A man with a big heart, there was room for everybody, even the pets.  The appliance and air conditioning he learned in Omaha was his life long work and he did that for nearly 50 years, retiring due to ill health in October 2014.He worked for Montgomery Ward, Bob Edwards at City Electric but eventually decided to freelance  and that served him well over the years.  He was know for his high degree of integrity and  had many returning customers who trusted him.  His humor and kindness took him through many of the storms of life and he would always have great insight - a trait that will be sorely missed.He loved the old stories that the old timers would tell or of his years on ranches and it always brightened him up to think of the shenanigans.  Leonard was preceeded  in death by his beloved daughter, Rose, his parents, two brothers, Ray, and Jim and his first wife, May.  He is survived by his wife, a brother, Keith, of Lander, sister, Esther of Thermopolis, and a sister Lois, of Casper, three daughters, Catherine (Perry) Roberts of Billings, Brenda  Heezen (Jess) of Antioch, California, and Amanda(Gregg) Motonaga of Soldotna, Alaska. Also surviving him is six grandchildren - KC and Grace Gaskin, Lindsay Roberts, Hannah Roberts, Lili Wenstrom and Jordin Heezen  and one great grandson, Tatum as well as his beloved little dog, Rascal.   Graveside Services will be held at 2:00 on Thursday, August 27, 2015, at the Willow Grove Cemetery in Buffalo. A gathering of family and friends will follow in the city park by the bridge.Kane Funeral Home has been entrusted with arrangements.