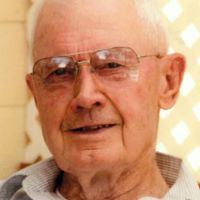 Leonard Allyn Straatsma, 95, of Sheridan, WY died peacefully surrounded by family on Saturday, September 8, 2018, at the VA Hospital in Sheridan, WY. Leonard was born on August 6, 1923, in Gillette, WY to Ruel and Agnes (Ewry) Straatsma. He spent most of his youth growing up on a ranch outside Gillette. In later years, he moved to Midwest and graduated from Midwest High School. After high school he joined the United States Army and served in various locations in the Pacific during WWII. Leonard married Ruth Rorabeck on August 11, 1946, in Story, WY.  He attended Montana School of Mines in Butte, MT. Leonard worked for Standard Oil of Indiana (AMOCO) in Midwest and Wamsutter, WY for 42 years. After retiring, Leonard and Ruth moved to Story where they lived for 30 years before moving to Sheridan. They both enjoyed music and dancing and spent many years in a square dancing club. Leonard and Ruth recently celebrated their 72nd wedding anniversary with family at their home in Sheridan. Leonard is survived by his wife Ruth, sons Richard and Steven (Olga) of Scottsdale, AZ; daughters Laurel Wheatley of Shady Shores, TX and Tracy Zinke of Sheridan; sister Lois Largent; brother Dean Straatsma; grandchildren Cristine, Sean, Jennifer, Cameron, Susan, Jared and Alex; great grandchildren Taylor, Mallory, Lance, Lane, Avery, Lily and Connor; and several nieces and nephews. Leonard was preceded in death by son Gary; and grandson Nicholas. A viewing will be held from 9:00 to 10:00 am on Thursday, September 13, 2018, at Kane Funeral Home. Graveside services and interment will be held in Casper at Memorial Gardens at 1:00 pm on Thursday, September 13, 2018, with Pastor Bill Dill officiating. In lieu of flowers, donations can be made to Grace Chapel Church, 31 N. Piney Rd., Story, WY 82842.Kane Funeral Home has been entrusted with arrangements.