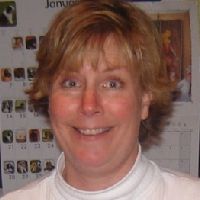 Linda Marie Gifford died at her home of cancer on June 25th with her family by her side.She was born in Camp Pendleton, CA on June 21st, 1960 to the late Harold Coleman and is survived by her mother Rosa Grainger of Oak Island, NC. Linda graduated from Sheridan High School in 1979. She married the late Philip Gifford in 1983 who courted her when she was working at Perkins. His humor and persistence made her fall in love with his personality! Linda was a hard worker and was willing to learn any job. Her sense of humor was infectious. She worked at The Lodore in Story, Wy, followed by Perkins, Wal-Mart, Home Depot, and the Sheridan Community Federal Credit Union. While at Wal-Mart she met her best friend and co-conspirator Holly Gupton. They were blessed with an opportunity to go on a wonderful trip to Paris, France together. After Linda’s husband Phil passed in 2008, her daughter Holly introduced Linda to Anton Bocek, who became a significant part of her life for the last 7 years. He welcomed her into his home and family and for that her family is extremely grateful. Linda was an avid gardener and skilled crafter. She enjoyed horn hunting with Anton and taking walks with her sister Carol Clark. She visited Oak Island, NC often, spending time at the beach with her younger sister Cheryl Cummings, “bobbing” in the ocean and playing cards with her mother Rosa. Her brother Mark Buettner was a great big brother watched over her growing up. The loves of Linda’s life were her daughter Holly,granddaughter “Junebug”, son-in-law Peter Irey, Anton, and her dog Calie. Linda also had a special place in her heart for Joseph, Ashley, Karson and Joan who provided much needed support during her last year.In lieu of flowers, the family is requesting that donations be made to Sheridan Senior Center Home Delivered Meals as Linda enjoyed volunteering with this organization in the past.A Celebration of Life will be held Tuesday, June 28, at 6:30pm at Scott Park in Dayton Wyoming.