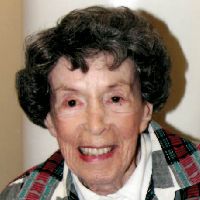 Lois Washut left this earth on December 9, 2015. During her 95 years she made many friends, always endeavoring to stay connected and interesting.She was born on August 8, 1920 in Custer Montana; the youngest of eight children born to HJ and Stella Maxwell Paustian. She was very close to her parents and sisters: Gladys Janich, Mamie Zoutte, Dorothy Hayes, Thelma Allen and brothers: Chris, Clarence and Paul. All of whom preceded her in death. Her husband of fifty-two years, Louis, died in 1993. She is survived by her son and daughter-in-law Leon and Hazel Washut, granddaughter Kim Chandler, great granddaughters Rachel Marshall and Amie Young and great-great grandsons Cameron Black and Elliott Marshall. Also surviving her are three generations of nieces and nephews with whom she enjoyed many close relationships.Her life’s journey started when she was five years old with a family move to the HN Ranch on Wolf Creek near Ranchester, WY. Completing twelve years of education in Ranchester she graduated in 1938 and began studies at the University of Wyoming. She married Louis Washut in 1940 and the couple lived in Acme and Monarch where Louis was employed by Sheridan-Wyo Coal Company. Their son, Leon, was born in 1941. Lois and Louis were active in PTA, scouting and other Monarch activities. With the closing of the mine in 1953 the family moved to Billings, Montana where Lois began her career in the insurance industry. Starting as a secretary, promoted to insurance adjuster and by the mid 1960s she became the first female manager of a claims office for Safeco Insurance. She was very proud of breaking that corporate glass ceiling. During her business life in Billings she actively promoted the interests of women in business.Retiring in 1982 she and Louis moved to the beautiful cabin they build outside Red Lodge, Montana. Eventually, seeking warmer winters they then moved to Queen Valley, AZ where she expanded her friendships becoming a golfer and the director of the local fire district. She returned to Sheridan County in 1993 and after the death of her husband, she was very purposeful in continuing to be active and involved. Cards, bowling, hiking and travel filled her busy schedule. One of her 85th birthday presents was a pair of gloves she used in her kick boxing work out. At 90 she was still “pumping iron” at the YMCA. Even when diminished eye sight robbed some of her independence she continued most of those activities. Family and friends were there for her when she needed them.The friendly, comfortable setting at the Sugarland Ridge assisted living facility was home the last few years of her life; she was rarely absent from her seat at the Bingo table.Her death leaves a void but more importantly her life serves as a model for living life to the fullest. There is no ceremony immediately planned but the family is planning a celebration of her life for this coming summer. For those that wish to honor her with a memorial contribution, a memorial has been established at the Sheridan County Historical Society and Museum. Kane Funeral Home has been entrusted with arrangements.