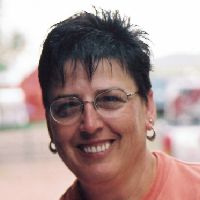 View Service Folder | Click for Video Tribute Lorene Podgornik Hartman, 60, of Sheridan, passed away on Tuesday, November 11, 2014, at the Swedish Medical Center in Denver.Lorene was born November 19, 1953, in Sheridan, WY, to Paul and Louise (Bartholow) Ross. She grew up in Sheridan and attended Sheridan schools, graduating in 1972 from Sheridan High School. Lorene married Jon Podgornik in 1973.They were married 32 years. On December 28, 2007, she married Charles “Boogie” Hartman.Lorene and her mother owned their own business, A Stitch in Time. Lorene was an expert seamstress, able to mend anything, do alterations and sew clothing “from scratch.” She later worked at McDonald’s as a manager before going to Walmart to work. She worked at Walmart 18 years in many different departments, making friends all along the way.Lorene loved her Harley and going on rides and trips with Boogie and other friends. Owning a Corvette was a highlight of her life. She loved her dogs-all five of them, and she loved spending time with her grandson, Merrick. She was very proud of her house and yard.Lorene was preceded in death by a grandson, Triston Podgornik and step father, Jack Ralston. She is survived by her husband Boggie, parents Louise Ralston and Paul Ross; daughters, Jessica Podgornik, Sheridan, WY, and Natasha Podgornik, of Cheyenne, WY; Kim Arzy and son, Marc Hartman of Sheridan; sister, Paula Lenz (Pat Burke); brothers, Mack (Joyce) Ross, Bill (Sue) Bohm all of Sheridan, WY, Tom (Geri) Bohm, of Hermiston, OR, Jack (Andrea), and Jay (Debbie) Ralston of Sheridan, Jerry (Linda) Ralston of Cody, WY, and Jeff (Yanik) Ralston of Colombia, South Carolina; grandchildren, Merrick Brown, Latisha Travino and EJ Arzy, many cousins, nieces and nephews, many, many friends and by her dogs; Radar, Dolly, Maybelle and Zula.A Celebration of Life will be held at 2:00 p.m. on Wednesday, November 19, 2014, at Kane Funeral Home with Pastor Doug Goodwin officiating. A reception will follow in the Kane Reception Hall.Memorials to honor Lorene may be made to the Sheridan Dog and Cat Shelter at 84 East Ridge Rd., Sheridan, WY 82801.Kane Funeral Home has been entrusted with arrangements.