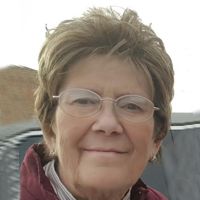 Lou Ann Hansen, age 65, of Sheridan, passed away on Saturday, July 9th, 2016, at the Billings Clinic.She was born to parents Billy Woods and Charlotte (Krause) on December 17, 1950 in Gillette, WY. She was raised by her mother and step father, Charles Pollard, in Moorcroft, Wyoming on the Shipwheel Ranch. She graduated from High School and moved to Sheridan to attend college. She then met the love of her life at the Sheridan Wyo Rodeo and later married George Hansen on December 30, 1970.Lou Ann enjoyed sewing, garage sales, thrift stores, crafting, cooking and baking. She loved her family especially, her grandchildren and her dog Buffy. She endured many health issues but always had the best attitude and NEVER complained. If anyone mentioned to her that they needed anything, she would do her best to find several of that item for them. Any one who met her would say, she was the most generous, loving, kind hearted person in the world.Lou Ann was preceded in death by her father, Billy; step father, Charles; and sister, Lynn Dee Woods. She is survived by her husband, George; daughters, Jenny (Ken) Clemens; Stacy (Steve) Holwell; and Lori (Jeff) all of Sheridan, WY; mother, Charlotte Pollard of Buffalo, WY; seven grandchildren, Derek, Braydon, Rourke, Tristen, Baylee, Nate and Ally.A Celebration of Life reception will be held at 2:00 p.m. on Friday, July 22, 2016, in the Kane Reception Hall.Memorials to honor Lou Ann can be made to the Sheridan Dog and Cat Shelter, 84 East Ridge Road, Sheridan, WY 82801.Kane Funeral Home has been entrusted with arrangements.