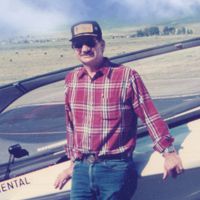 Louis J. Ruby, 83 passed away Friday, August 15, 2014, at his residence. Louis was born in Sheridan on May 5th, 1931. He attended Sheridan County Schools and while in High School he shared a story about riding his motorcycle down the halls. Louis served in the Army and was stationed in Germany during the Korean War. He returned home to marry Elsa Sturtz on Sept. 19, 1953, in Sheridan. It was 60 yrs of wonderful memories.Louis started Ruby Construction in 1969. Had the opportunity to have a wonderful work crew.They were family members, friends, and sons. He had the business for 10 yrs and turned it overto a son in 1979. Louis had the opportunity to work as a boss at Spring Creek Coal and enjoyed all aspects of the mines production.Lou attended Sheridan College taking numerous classes to keep his mind sharp..as he would say. Lou\'s passion was building a Long-Easy Airplane at his home. The countless hours were so enjoyable for him. The journey of flying had giving him the possibility of meeting so many great friends. Spent many hours at the airport hanger just reminiscing about that days flight. They took off almost every saturday morning to have breakfast in Hardin, MT or Cody, WY. He often talked about flying in formation with all his wonderful \"Riders in the Sky\". Lou flew many years for the Sheridan County Sheriff\'s Office. He will be sadly missed by family, friends and everyone that passed him with a hand wave in the sky.Lou was preceded in death by a son, Tom Ruby. He is survived by his wife and two sons, Rock Ruby and Steve {Beth} Ruby, and one grandson Jason Ruby.The Family wishes to extend their gratitude to Sheridan Memorial Hospitals ICU unit and personal care by Dr. Ian Hunter.A Celebration of Life will be held at the graveside at 10:00 am Thursday, August 21, 2014, in the Sheridan Municipal Cemetery with Reverend Kevin Jones officiating. Military Honors will follow the service.In Lieu of flowers, memorial donations may be made to the Sheridan Dog and Cat Shelter at 84 East Ridge Road, Sheridan, WY 82801.Kane Funeral Home has been entrusted with arrangements.1931