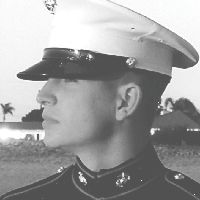 View Service FolderMichael Craig Rice, 33, of Sheridan passed away on Saturday, April 21, 2018. Craig was born on July 29, 1984 to parents Michael S. Rice and Theresa Miller Rice in Sheridan, WY. Craig graduated high school in 2003. After graduation, Craig joined the United States Marine Corps. Craig was enlisted from 2004-2009 and served two tours in Iraq during that time. After Craig was honorably discharged in 2009, he went on to continue his education at Arizona State University. Craig moved back to his hometown of Sheridan in 2012 to be closer to his family. Craig loved wrestling in high school, enjoyed rock climbing and loved spending time in the Big Horn Mountains. Craig was an avid Denver Broncos fan. He was a member of the First Baptist Church and cherished his time at Camp Bethel while growing up. Craig found joy in making others laugh and had the ability to light up any room he entered with his story telling and infectious grin. Craig was preceded in death by his grandfather CR Sam Miller, his uncle Samuel Miller, and his uncle Duane Crook. He is survived by his daughter Bella Lynn Rice of Glendale AZ, father Michael Scott Rice of New Orleans, LA, mother Theresa Miller Rice, brother Alex Adam Rice, sister Emma (Rob) Johnson, grandmother Donna Miller, grandmother Annette Rice, all of Sheridan, WY, and grandfather Richard (Mary Helen) Rice of Las Cruises, NM, along with many aunts, uncles and cousins. A Celebration of Life with Military Honors will be held at 2:00pm on Friday, April 27, 2018 at the First Baptist Church. Memorials to honor Craig’s life can be made to the Volunteers of America, Life House, at 1876 S. Sheridan Ave., Sheridan, WY 82801, or to the Bella Rice College Memorial Fund, C/O US Bank, 203 S. Main St., Sheridan, WY 82801, Attn: Debbie Miller.Kane Funeral Home has been entrusted with arrangements.