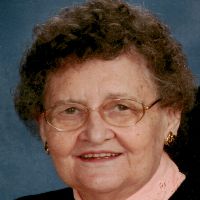 Jean Buell, 83, of Sheridan, passed away on Saturday, May 16, 2015, at Sheridan Memorial Hospital.Jean was born to parents, Joseph and Katie (Luke) Motica on April 14, 1932. Jean attended school at Taylor, Holy Name and Sheridan High School. On January 2, 1956, she married Eldon Buell in Sheridan, WY. Eldon and Jean lived at the Buell family ranch from 1956 to 1958. They moved to Sheridan in 1958 until 1962. In 1963, Jean and Eldon moved to Clearmont after purchasing the Standard Service Station and Bulk Plant. They sold the bulk plant in 1983, and owned a construction business until 1994, when they retired and moved to Sheridan.Jean loved fishing, snowmobiling, Polka dancing and traveling to Polka festivals, sewing, knitting, doing crafts, camping and spending time with her family. She was a member of Threaders, Holy Name Catholic Church and St. Mary\'s Church of Clearmont.Jean was preceded in death by her parents and brothers, Jack and “Joe” Tom Motica. She is survived by her husband, Eldon; son, John (Jane) Buell; daughter, Mary Kay (Layne) Liggett, all of Sheridan, WY, and grandchildren; Danny and Katie Buell, and Kaylyn and Kelby Liggett. She is also survived by two nieces and one nephew.A Visitation will be at 6 pm and Rosary will be at 7 pm at Kane Funeral Home, Wednesday, May 20, 2015 with Father Ron Stolcis officiating. Mass of the Christian Burial will be Thursday, May 21, 2015, at 10 am at Holy Name Catholic Church with Father Brian Hess officiating. Internment will be in the Sheridan Elk\'s Memorial Cemetery. A reception will follow in the Parish Hall at Holy Name Church.Memorials can be made to Holy Name School, 121 S. Connor, Sheridan, WY, 82801, or to the Elk\'s Memorial Cemetery, P.O. Box 624, Sheridan, WY.Kane Funeral Home has been entrusted with the arrangements.