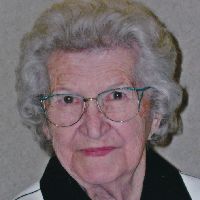 View Service FolderMargaret F. Ellenwood, 94, of South east Sheridan (Banner), passed away on Monday, April 18, 2016, at the Westview.Margaret Francis Ellenwood, was born on August 13, 1921 in Sheridan Wy. She joined her loved ones in Heaven on April 18, 2016. Margaret was the 9th child born to Hedwick and Mike Krezelok and lived on the family’s ranch on Piney Creek. Margaret attended the one room stone school house on Piney Creek for 8 years (often walking or riding horseback to school). Upon graduation from the 8th grade, Margaret stayed home to help tend to her mother, who was in poor health at the time. She later worked for the Rudolf family near Sheridan. Margaret met and married Earl “Dizzy” Ellenwood and made their home in a small house on Piney. Margaret and Diz both went to work on a nearby ranch for Francie & Paul Wood, later moving to the Wood Ranch where they lived and raised their 4 children, Ken, Bonnie, Delores, and Mike. Diz and Margaret purchased the ranch in the early 1960’s from Francie Wood Padgent, and lived out their lives there. Besides raising her children and helping Dizzy with all of the ranch work, Margaret raised large gardens, including raspberry and strawberry patches. She loved flowers and had many large, beautiful flower beds around the yards. In addition, she enjoyed sewing, handiwork, cooking, baking, canning, and candy making. She LOVED dancing and polka music! Margaret was a very caring, giving, hard working person who always put others first. She loved having all of her family together and around her, even as she became more frail, and all the “chaos” would tire her out.She made significant contributions to the Ucross and Piney Creek communities and Sheridan area through her active work in the Piney Homemakers Club, 4-H Club, FHA Loan Board, Sheridan County Cattle Women, and Sheridan Does. She served in leadership roles as well as being an active working member in each organization. She was preceded in death by husband, Earl “Diz” Ellenwood, son Kenneth Ellenwood, her parents Hedwick Helen and Michael Joseph Krezelok, sisters Anne Fairbanks, Hedwick Miech, Mary Miech, Helen Slater Frances Krezelok, brothers Joe, Frank, and Mike Jr. Krezelok. She is survived by two daughters, Bonnie M. Ellenwood of Buffalo, and Delores I.(Juaquin) Michelena of Arvada, son Michael E. (Bonnie) Ellenwood of Banner, daughter in law Jean Ellenwood of Sheridan, 6 grandchildren Nicky (Kevin) Legerski, Shayne (Tammy)Ellenwood, Janell (Justin) Hulford, Josh (Shawna) Michelena, Stacey Ellenwood, and Michel Michelena, and 9 great grandchildren.Donations to honor Margaret may be made to the,Sheridan Senior Center, 211 Smith St.,Sheridan, WY 82801,or the Sheridan County Fulmer Library, 335 W. Alger, Sheridan, WY 82801,or to the donor\'s choice.Kane Funeral Home has been entrusted with arrangements.