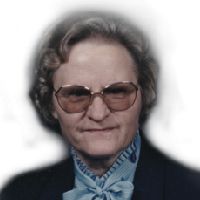 Margaret R. Eversull, 88, went to be with the Lord on Friday, August 7, 2015.  She was born on October 18, 1926, in Chadron, NE. She was raised on a farm west of Marsland, NE.Margaret married Harold Eversull of Crawford, NE, on May 27, 1946, in Gering, NE. They moved to Worland, WY, then to Gillette, Riverton, Buffalo, and Sheridan. She was a homemaker and a volunteer at the Sheridan Senior Center. She was a member of the Elks DOES and Grace Baptist Church. She was a warm and loving mother and friend, and she loved the Lord.Margaret was preceded in death by her husband, Harold Eversull, son, Gene Eversull, granddaughter, Tricia Eversull, her parents, three brothers and three sisters. She is survived by a brother, Bill Rohde of Gillette, WY, sister, Zelma McLaughlin of Gering, NE, son, Aaron of Mena, AR, six grandkids, Amy Walker of Willow, AL, Ryan Eversull of Casper, WY, Scott Eversull of Idaho Falls, ID,  Michelle Hymas of Boise, ID, Deidre Ditton of Sheridan, WY, Tabatha Eversull of Denver, CO, Patrick Eversull of Jacksonville, NC, and ten great grandchildren.Memorials to honor Margaret may be made to the Grace Baptist Church at 1959 E. Brundage Lane, Sheridan, WY 82801 or to the Sheridan Senior Center at 211 Smith St., Sheridan, WY 82801.Services for Margaret will be held at 10:00 on Wednesday, August 12, 2015, at Kane Funeral Home with Pastor Steve Anderson officiating. Interment will be in the Elks Memorial Cemetery with a reception to follow in the Kane Reception Hall.Kane Funeral Home has been entrusted with arrangements.