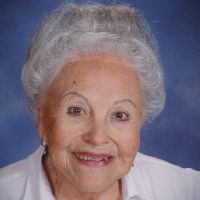 Maria Elena Hoeck, 91, of Sheridan, passed away on Friday, January 13, 2017, at the Sheridan Memorial Hospital with her family by her side.  She was born October 9, 1925, to Francisco and Estefania (Diaz) Chavez in Los Angeles, CA, and she attended schools there.  Maria Elena married Charles E. Thomas on July 12, 1944, after he served our country in the Marines.Maria Elena\'s love of music was evident at a very young age.  Her older sister, Estefania “Mickey” Cadena was equally talented.  They performed, sang and danced throughout their entire lives.Maria Elena lived and worked in Boise and Donnelly, ID, area for 33 years.  She worked in the Sears Credit Department for 13 years and owned and operated a real estate office for 25 years until retirement.After meeting and marrying Richard Hoeck in 1991, she then moved to beautiful Sheridan, WY.Maria Elena was preceded in death by her first husband, Charles Thomas; her son, Charles Edward Thomas and her sister, Estefania “Mickey” Cadena.  She is survived by her husband, Richard Hoeck and five children; Clara “Ria” Long, Christopher “Rocky” Thomas, Cecilia Nedelko, Mark Thomas and Loretta Bush; 12 grandchildren and 12 great-grandchildren.  Her extended family includes her husband\'s son, Carl Hoeck and his foster daughter, Nancy Bana.A Memorial Mass will be at 10 AM, Thursday, January 19, 2017, at Holy Name Catholic Church with Father Michael Ehiemere officiating.  A reception will follow in the Parish Hall.Memorials may be made to Holy Name School, 121 S. Connor Street, Sheridan, WY, or to the Sheridan Senior Center, 211 Smith Street, Sheridan, WY, 82801.Kane Funeral Home has been entrusted with arrangements.