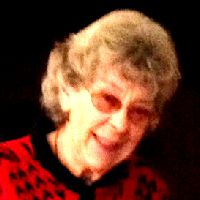 Marlys Rose Teigland, 81, died at home in her beloved Story, Wyoming on Thursday, August 14, 2014. Marlys was born January 2, 1933 in Ghent, Minnesota to Edward and Julia Maertens. She spent most of her childhood in Canby, Minnesota and was the second of three children. She was preceded in death by her parents, her sister Marlene, and her husband Wally. She is survived by her brother Roger Maertens (Marcia) and her children, Mari Hoyt (John), Pat Teigland, Dave Teigland (Chrystal), Jon Teigland (Zena), and Jana Thompson (Tom). She dearly loved her grandchildren, Angie, Katie, Josh, Shandra and Devin and her great grandchildren, Ella, Addie and Natalie.Marlys graduated from Canby High School in 1950 and from the Bartron School of Nursing in Watertown, South Dakota in 1954. She married the love of her life, Waldemar (Wally) Teigland, on June 10, 1954 at St. Peter’s Catholic Church in Canby. She was an RN at Canby Hospital until 1967, the year they moved to Story, Wyoming. They travelled to their new home in an amazing RV that Wally built from an old delivery milk truck, complete with sink, stove and bunk beds!After settling in Story and delivering her fifth child two months later, Marlys started working at the Johnson County Memorial Hospital in Buffalo, Wyoming. She spent the majority of her nursing career in Buffalo. In later years, she taught nursing courses at the Sheridan College. The job that brought her the most joy was working as a volunteer at the Story Elementary School where the children called her Grandma Marlys.Marlys was very active in the Story community, to include Our Lady of the Pines Catholic Church and various social groups. Marlys and Wally loved the Story community and the nearby Big Horn Mountains. There was no place other than Story they would rather be, except Heaven, where they are now reunited.A funeral mass will be held at Our Lady of the Pines Catholic Church in Story at 10:00 a.m. on Wednesday, August 20, 2014. Burial will follow at the Quiet Rest Cemetery near Kearney, Wyoming. A reception will be held at the Story Women\'s Club following services.In lieu of flowers, donations may be made to the Sheridan Dog and Cat Shelter at 84 East Ridge Rd., Sheridan, WY 82801 where Marlys adopted her beloved dog Jet. He was her constant companion and brought her great joy the last year of her life.Kane Funeral Home has been entrusted with arrangements.