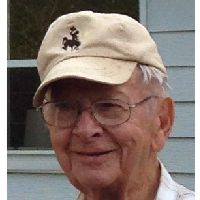 ‍Marvin L. Fritz, 87, passed away on Friday, September 5, 2014, at the Billings Clinic following cardiac surgery. He was born on October 23, 1926, in Edgemont, South Dakota, to parents Leland Ruwee Fritz and Florence (Witter) Fritz.Marvin married Venida Mary Prentice on October 25, 1943. They met when she moved to Edgemont to work at the nearby Black Hills Army Ordnance Depot during World War II. He joined the U.S. Army in 1945, and while home on leave in the Black Hills prior to shipping overseas they heard shouting and car horns signaling that the war had ended. He spent the following year in the Philippines helping process troops home from the war. Marvin and Venida had been married for over 65 years when she passed away at their Sheridan home on January 11, 2009.Music was his livelihood. His mother taught him to play the piano and he began playing for dances in the Edgemont area in his early teens. It was his mother who brought him to Sheridan when she found him a job with a local band while she was working at Eatons’ Ranch. Marvin and Venida moved to Sheridan in 1947. He attended Sheridan College on the GI Bill and was part of a music group that performed around the state to recruit students for the college. He spent his career playing dinner and dance music at places like Kelly’s Bar and the Lodore Supper Club in Story, the Crescent Hotel, Maverick Supper Club, and the Sheridan Inn. For the last 36 years of his career he entertained countless people at the Golden Steer on North Main. For many years he gave piano and organ lessons and sold Hammond organs throughout northern Wyoming for the Davis Music Store.Marvin loved travel and flying. He was a pilot and operated a charter service for several years. Some of the major highlights of his life were his occasional trips with Venida, particularly to California and the American Southwest. For many years he also flew his partner and friend Fenworth “Doc” Downing to medical conventions throughout the country.He played in the Kalif band as a member of the Shrine and in the Drum and Bugle Corps as a member of the Sheridan American Legion. He was also a member of the Elks Lodge.He was a wonderful and much-loved husband, father, grandfather and great-grandfather.He was preceded in death by his sisters Elinore and Phyllis. He is survived by his daughter, Sherry (Dick) Krajczar of Big Horn and son Doyl (Jaci) Fritz of Wolf, his grandchildren Josh Krajczar, now living in Shanghai, and Morgan Krajczar Jacobs, who lives in the Philippines, Jennifer (Jerry) Gulley of Sheridan and Jack (Michele) Fritz of Ranchester, great-grandchildren Areya and Troy Jacobs, Nan Gulley, and Maya and Isaac Fritz, and step great-grandchildren Chris, Jerrico and Taylor Gulley and Leslie (Gulley) Booth, all of Sheridan.A Celebration of Life will be held at 11:00 on Saturday, October 4, 2014, at St. Peter\'s Episcopal Church with Father John Meyer officiating. Lunch will be provided following the service in the church hall. In lieu of flowers, memorials may be sent to the Sheridan Senior Center at 211 Smith St., Sheridan, WY 82801.Kane Funeral Home has been entrusted with arrangements.