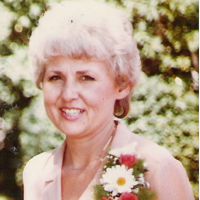 Mary Ann Bovaird, Wife, Mother and Grandmother went home to her Savior March 7, 2015. Born June 18, 1940 in Minneapolis, Minnesota to Clara Kubiatowisc and Ewald Klevgaard, Mary Ann is survived by her husband Russell, her four children Randy, Karla and husband Jon, Shaun, Melissa and a lovingly spoiled group of grandchildren, Joshua, Drew, Amiah, Kylee, Ben, Emily and Tanner who will miss her most of all. Mary Ann grew up in Casper, Wyoming and graduated from Natrona County High School.  After high school Mary Ann attended nursing school in Washington before returning to Casper to meet one of her most faithful and oldest friends and maid of honor Vyrla Prior. She was not a letter writer but loved her friends so deeply and dearly that each time she moved she took part of them with her.  Her special friends in Denver, the G.T.’s, held a particularly special place in her heart.  Her friends in Sheridan just as much so for being so willing to include her in their lives for a short time.  She met and married her husband of 54 years, Russell, in Casper as well.  They moved to Wheatland, Wyoming where they lived, loved, worked and raised a family. In retirement, Mary Ann and Russell lived in Thornton, Colorado where Mary Ann spoiled her first group of grandchildren. The family then moved to Sheridan, Wyoming where Mary Ann found more grandchildren to spoil.  When Mary Ann and Russ moved to Wheatland and four children ensued, the neighbors began building privacy fences and memorizing Mary Ann\'s phone number for when things disappeared (like strawberries from someone’s garden) or things got broken (like many branches from a specimen apple tree).  Mary Ann was a champ at apologizing for her children\'s energy.  She was a firm but gentle disciplinarian-only knocking her children down when they lost their balance while being spanked (is it legal to say this?).. She tirelessly volunteered, as a nursing home assistant on weekends, at the League of Women Voters, many local elections, babysitting, being a den mother, teaching Sunday School, taking census, and later one of her favorite jobs-being a children’s leader for Bible Study Fellowship.  She has boxes filled with photographs of the 3 and 4 year olds she taught and remembered each one by name and every child’s personality.  Mary Ann loved the outdoors and any place with flowers and flowing water.  She grew flowers, and loved to can fruits and vegetables. She was known to go camping with her family and be the one to fill the trunk of the car with rocks and sticks to take home because they were ‘pretty.’ She took many of these rocks with her each time she moved, but only the biggest ones. Painting and music were her passions. She had an ‘art’ room where she stored just about every drawing or coloring book picture ever given to her. It was very important to her to encourage all her grandchildren in one of these depending on the child.   Mary Ann loved Jesus, life, her family, and her faithful, sweet friends.  It was hard for her to let go of each of us as it has been hard for us to let go of her, however, she was anticipating the day she would see her Savior face to face.  Her wonderful spirit and joy will be celebrated at a 2 pm service at Grace Baptist Church of Sheridan on Saturday, March 14, 2015. In lieu of flowers please send a donation to Hospice of the Big Horns at PO Box 391, Sheridan, WY 82801 or to Grace Baptist Church Missions Fund at 1959 East Brundage Lane, Sheridan, WY 82801.