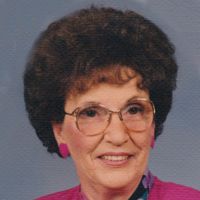 Mary was born on December 5th, 1922, in Rapid City, S.D. to Clarence and Nellie (Fox) Switzer. She lived with her parents and three siblings at Rocky Point, WY, a small farm and ranch community, 60 miles northeast of Gillette, WY. The one room schoolhouse up the road provided the four Switzer children with a formidable education as well as many fond childhood memories. Perhaps those same memories inspired her later to teach at a similar school. Since Rocky Point had no high school, it was decided the three girls would live with their maternal grandmother and attend Cathedral Catholic High School in Rapid City, SD. Leaving home to live with Grandma Fox and Aunt Josie for the school year had it\'s draw backs, but getting off the farm and making new friends especially boys kept homesickness at bay. Those four years passed quickly and soon Mary graduated and was off to Normal Training in Gillette, WY.Teaching was nice but after meeting Chuck Fisher, who recently joined the U. S. Navy, she found herself wanting to move to San Diego, CA. where he was stationed. Coming from a close Catholic family, there was no way Clarence and Nellie would allow their daughter to travel to California alone. Hence she convinced her older sister, Norma, to go with her and permission was reluctantly granted.Mary selling shoes and Norma hair dressing, would afford them a small apartment in San Francisco and plenty of time to enjoy California during the 40\'s!  As expected, Chuck proposed and they were married Feb. 14, 1944. Following her husband\'s Naval discharge, they returned to Gillette and began a long and loving life together which would produce six children.A job opportunity in the early 60\'s brought the family to Sheridan and thus a new chapter in her already busy life began. Once the children were enrolled in school and Chuck employed at the VAMC, she found herself back selling shoes at Goars and NZ Shoes. After many years in the business, she hung up her shoehorn and retired but only after passing on her love of good shoes and purses to her three daughters.Mary was a member of Holy Name Catholic Church, Holy Name Council of Catholic Women, and an active 30 year member of Al Anon.Mary was preceded in death by her father (Clarence), mother (Nellie), husband (Chuck), sisters (Melpha and Norma) and daughter-in-law (Tina). She is survived by her brother Bill Switzer, three sons Norman, Larry (Rebecca), Terry (Sharon), and three daughters D\'Ann Naugle, Dalene (Steve) Roe, Donna (Larry) Bergman. Surviving grandchildren are Scott Roe, Jeff (Lori) Roe, Eric (Jennifer) Roe, Brian (Shelley) Kinnison, Janelle (Justin) Coon, Taylor (Maria) Fisher, Aaron (Elisa) Fisher, Raz Fisher, Ryan (Shannon) Connolly, Katie (Paulino) Rios and ten great grandchildren.A Mass will be held at 2:00 pm on Friday, June 30, 2017, at Holy Name Church with Father Robert Rodgers officiating. A reception will follow in the parish hall. Memorials may be made to Greenhouse Living for  Sheridan, 2311 Shirley Cove, Sheridan, WY, 828001 in care of Julie, Activities Director.Kane Funeral Home has been entrusted with arrangements.