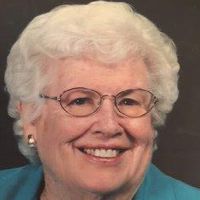 Mary Elizabeth Rhodes was born in Casper, Wyoming on September 11, 1923 to Elizabeth Harte Doherty and James J. Doherty, Irish immigrants, and passed away on July 6, 2015. She graduated from Natrona County High School then attended the University of Wyoming, Washington University in St. Louis and Sheridan College. She was a member of Pi Beta Phi Sorority. She was the eldest of five siblings. She married Jack R. Rhodes of Sheridan on December 27, 1943. They lived in St. Louis, Omaha, Germany, Detroit, and Cheyenne as Jack completed his army tour of duty then completed his residency in surgery. In 1953 they moved to Sheridan where Jack practiced medicine until 1992. They were blessed with seven children.Mary had a wonderful life. She was 100% Irish, complete with temper and dazzling debate skills. She grew up during the Depression in Casper in a working-class family and always valued above all else her faith and family. She had a strong belief in character and the value of hard work. Mary had a wonderful lifelong romance with her husband, Jack, whom she met at college. He was already accepted into medical school when Pearl Harbor altered everyone’s life. They moved to St. Louis and while Jack finished medical school Mary had a very important job with the Missouri Pacific railroad helping to direct troop movements through St. Louis, a busy hub, during World War II.In later years she missed the responsibility and the challenges of her job and often dreamed of being a lawyer or perhaps a politician. She expected all of her children and their visiting friends to argue and justify their beliefs and activities at all times, which made for a noisy and often chaotic household. Everyone knew that despite her pointed criticisms she would ferociously defend those who strayed from conventional rules. She loved underdogs. She loved politics and politicians, often stopping them on the street to argue about a policy.While raising her seven children she continued to take courses at college. She admired her daughters and her granddaughters for their amazing prowess in blending careers with family demands. Like her friends she made a valiant effort to guide her children through the trying years of Vietnam and the many challenging cultural changes in the decades that followed. Her children all loved and admired her for her efforts. She enjoyed reading, gardening, theater, the Big Horn mountains and traveling to visit her far-flung family over the years. Late at night when the house was quiet she would play Debussy on the piano in the serenity of her living room. She was active in the Altar and Rosary Society at Holy Name Church, Friends of the Library, Sheridan Hospital Auxiliary, Meals on Wheels, and and she was a minister to Homebound Outreach at Holy Name Church.Mary wrote to one of her children, “As an old lady I knew I had a great life with a husband and family that I loved. I always had great memories of my own dear parents and childhood. Family was important to me always. I hope I’m going to Heaven and will meet all of you there. I’ve carried on but I’ve missed Jack terribly. I’m joining him. Think of it that way. Focus on your families and life! Honor me that way. I love all of you. Be happy! Love always.”Mary was preceded in death by her father Mr. James Doherty in 1976; her mother Mrs. Elizabeth (Harte) Doherty in 1987; her brother Daniel Doherty in 1992; and her beloved husband Dr. Jack R. Rhodes, MD in 1992. She is survived by sisters Mrs. Brigid \"Nancy\" McIntosh of Peabody, Mass.; Mrs. Patricia Cook of Houston, TX.; and Mrs. Cecilia Gray of Casper, WY; her sons Col. James Rhodes, PhD (Kimie) of Tokyo, Japan; Michael Rhodes(Diane) of Austin, TX; Dr. Barry Rhodes, MD (Pam) of Eau Claire, WI; John Rhodes (Michiko) of Lynnwood, WA; and Rev. Tom Rhodes (Stephanie) of Solsberry, IN; her daughters: Patricia Bartz (Tim) of Helena, MT, and Dr. Nancy Kay Rhodes of Escondido, CA; seventeen grandchildren; seven great-grandchildren and several nephews and nieces.Mary would like us to thank the wonderful staff (“her friends”) at Touchmark on Saddle Drive and Rocky Mountain Hospice. In lieu of flowers, please send contributions in Mary’s name to Sheridan County Public Library, Rocky Mountain Hospice or Holy Name Catholic Church or school.A Visitation will be at Kane Funeral Home in Sheridan at 6 pm on Monday, July 13, 2015, with the rosary to follow at 7 pm. Mass of the Christian Burial -will be held on Tuesday, July 14, 2015 at 10 am at Holy Name Catholic Church in Sheridan, Wyoming.Kane Funeral Home has been entrusted with arrangements.