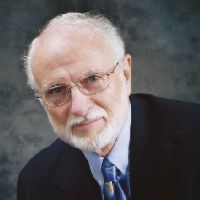 Maurice Bernard Campbell of Sheridan, WY completed his earthly pilgrimage at home on Monday, March 10, 2014 after a courageous fight with cancer. Maurice, “Mo,” was born January 29, 1930 to Earl and Cecelia (Dineen) Campbell in Sheridan. He graduated from Sheridan High School in 1947 and attended the first classes at Sheridan College while working as a teller at the First National Bank. He studied at the University of Wyoming before being drafted in 1951. He studied at the Army Counter Intelligence Corps School and served out his military service at the CIC Headquarters in Stuttgart, Germany. He returned to the University studying civil engineering but interrupted his studies again to accept an offer to return to Germany to screen refugees for immigration to the USA. While in Germany again he was fortunate to attend the Winter Olympics in Cortina, Italy. After two years he again returned to the University completing his engineering degree and accepted a job with the Lockheed Aircraft Corporation.He married Carola Rowland a student at UW from Pinedale, WY while they were both completing their studies. He transferred to the Missiles and Space Division in Sunnyvale, CA where he worked as a design specialist. After four years of study on March 15, 1972 he was ordained as a Deacon in the Anglican Communion. He most recently served on the clergy staff at Grace Anglican Church in Sheridan.After his retirement he and his wife moved to Bakersfield, CA where their daughter and her husband resided. Following the death of his wife in 1999 he married Barbara Fuller in 2002. They resided in California for five years returning to Sheridan for the summers. In 2007, they returned to Sheridan to make their home. He and Barbara took great pleasure in their music playing together often times at church, Lucinda\'s, Sugarland Ridge and the Green House. He was a great lover of music and participated in University bands, sang in choirs and Barbershop Quartets. He was selected as Distinguished Alumnus of Sheridan College in 2008. He fulfilled a life long dream when he and Barbara accompanied a clergy and spouse ten day pilgrimage to the Holy Land.He was preceded in death by his parents and first wife. He is survived by his wife Barbara, son David Campbell and wife Florence, granddaughters Melanie (Justin) and Emily (Wesley) and great granddaughter Elliott, daughter Dr. Mary Campbell and husband Dr. Michael Collins and son Dane Crockford. He is also survived by stepsons David B. Fuller (Sarah), Dr Thomas S. Fuller (Jane), Stephen L. Fuller (Dinah), ten step grandchildren and one step great granddaughter.A Memorial Service for Mo will be held at 2:00 on Thursday, March 13, 2014 at the Grace Anglican Church with Reverend Kevin Jones officiating. An Inurnment will be held in the family plot in Pinedale later this summer.Memorials in his honor may be made to Grace Anglican Church, 1992 W. 5th Street, Sheridan, WY 82801, Sheridan College Foundation, PO Box 6328, (Indicate on check what Foundation it is for), Sheridan, WY 82801 or to the Hospice of the Big Horns, PO Box 391, Sheridan, WY 82801.The family would like to especially thank Hospice of the Big Horns for their exceptional care.Kane Funeral Home has been entrusted with arrangements.