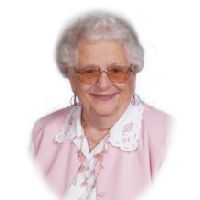 Mavis I. Nelson, 92, of Sheridan, WY, died on Monday, December 8, 2014 at West View Health Care Center.Mavis was born on May 10, 1922 at Armstrong, IA to Henry and Carrie (Goldsberry) Gangestad.Mavis was educated in Halfa, IA School. On March 3, 1942 She married Lyle V. Nelson at Princeton, MO. She lived in Armstrong, IA while Lyle served in the US Army from 1942-1946. After Lyle was discharged they farmed North of Armstrong in 1946 for a year. They moved to Swan Lake Potato Farm in Laurens in 1947. They raised mostly potatoes, corn, and soybeans. In 1984 they quit farming but continued to live on a farm. They moved to the town of Laurens in 1999.Mavis was a member of the Bethany Lutheran Church in Laurens, IA, where she served on many committees, and Trinity Lutheran Church in Sheridan, WY,. She also was a lifetime member of the VFW Post #3533 of Laurens, member of the American Legion for several years in Iowa, and President of the Womens Vegetable Growers in Iowa. In her spare time she enjoyed camping, fishing, traveling and crocheting and loved doing jigsaw puzzles. In earlier years they wintered in both Pascagoula, Miss, and Mission, TX.Mavis was preceded in death by her parents, son; Gene, husband; Lyle, brothers; Ernest and Arnold and sister; Helen Orange Gangestad.She is survived by her daughter Marcia (Daryl) Stechcon of Sheridan, WY, son Ronald (Wanda) Nelson of Battle Mountain, NV, sister; Doris Carlson of Armstrong, IA, four grandchildren; Jason, Niki, Scott, and James and numerous great grandchildren and step grandchildren.Inurnment will be held at the Laurens Cemetery in Laurens, IA, at a later date.Donations to honor Mavis can be made to the People\'s Assistance Food Bank, 2560 N. Main St., Sheridan, WY 82801.Kane Funeral Home has been entrusted with arrangements.

Date:
Start Time:
Inurnment will be held at the Laurens Cemetery in Laurens, IA, at a later date.
Location:
Tribute VideoService VideoService Brochure