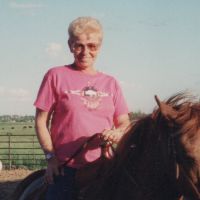 Maxine Carol Makinster, 75, passed away on January 4, 2018 at the Sheridan Community Hospital, in Sheridan, Wyoming. She was born on June 29, 1942 to the late Richard Elmer and Marie Leone Hicks.Maxine grew up in the Upper Peninsula of Michigan and raised her family in Lower Michigan; however eventually spent the majority of her life living in the mountain states. Partial to Wyoming, she settled there and spent the remainder of her years working as a hair stylist and enjoying hunting, fishing, reading, and spending time with her children, grandchildren, great-grandchildren and friends. She loved animals, especially riding horses.Maxine is survived by her brother, Donald Hicks, of Michigan, her five children, Vicki Marie Taylor of Spring Hill, Florida, Carol Maxine Casler of Gilette, Wyoming, Allson Dawn Casler of Buffalo, Wyoming, Mary Louise Casler Peden of Buffalo, Wyoming and Gordon Lee Casler, Jr of Holton, Michigan. Maxine blessed the world with 12 grandchildren and 26 great-grandchildren.Maxine was preceded in death by her late husband Jack Makinster, brothers Richard and William Hicks, and her sister Kay Parsons, as well as two grandchildren, Brandon and Misty.Per Maxine’s wishes, she was cremated and a private Celebration of Life was held for the immediate family. In lieu of flowers, the family requests that memorial donations be made to the Buffalo, Wyoming Animal Shelter.