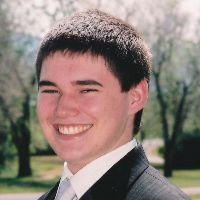 Michael Wade Westika, 23, of Sheridan, Wyoming died September 22nd, 2016. Michael was born on January 18th, 1993, in Casper, Wyoming, to Martha Westika and Patrick Ryan. He married his soulmate Ciara Link on May 24th, 2016. She graced him with a daughter, Ava Jo Louise Westika, on June 23rd, 2016.Michael loved playing cards and being outside doing various activities such as hiking, camping and going on various adventures. He was an enrolled member of the Northern Cheyenne tribe. He graduated from Sheridan High School in May 2011 and from Sheridan College in May 2014. He enjoyed spending time with his family and friends. He especially liked being with his pride and joy, Ava Jo. Michael was always smiling and loved to put a smile on anyone’s face he encountered.Michael was preceded in death by his parents, Martha and Patrick. He was survived by his loving wife, Ciara of Sheridan, Daughter Ava Jo of Sheridan, grandparents Susie and LeRoy Westika of Sheridan and Bess Ryan of Nokomis, Illinois, sister Nysha (Justin) Soper of Sheridan, uncles Paul and Tony Westika of Sheridan and Michael Ryan of Nokomis, Illinois, Godmother Norma Bixby of Busby, Montana, and nephews Kaiden, Jullian and Dylan Soper of Sheridan.A memorial service will be held at 10:00 AM, Friday, September 30th at Holy Name Church with Father Glenn Whewell officiating. There will be a luncheon to follow in the parish hall.In lieu of flowers, memorial contributions may be made to Ava Jo Louise Westika, P.O. Box 432, Ranchester, WY 82839.Kane Funeral Home has been entrusted with arrangements.