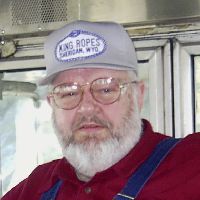 The world lost its most courageous soul since John Wayne when Michael A. Guy, Sr., passed away on Tuesday, July 12, 2016, at the Sheridan Memorial Hospital. He was surrounded by his family. Mike escaped death many times, but eventually succumbed to diabetes, heart failure, kidney failure, a collapsed lung, a gallbladder infection, pneumonia, and cancer.He was tough.Born on September 17, 1942, in Springfield, IL to Dolph A. and Florence (Boies) Guy, Jr., his parents taught him to be smart, honest and to carry himself with integrity. He graduated from Lanphier High School in 1961, and married his high-school sweetheart Dorothy Stankitis on April 28, 1962. She was the love of his life. They did everything together until the day he died.Mike honorably served for the US Navy as an Electronics Technician utilizing radar, sonar and electronic counter measures on submarines after the Cuban Missile Crisis. He was on active duty on the USS Gilmore for two years, and in the US Navy Reserves for four years, leaving the service with the rank of Petty Officer Third Class. He was employed for Xerox, Co. for ten years and worked his way from a technical representative to management. With a full-time job at Xerox and a family, he found time to attend college in the evenings and was a year shy of earning his bachelor’s degree. Mike brought his family to Sheridan in 1978 and finished his professional life as a locomotive engineer for the BNSF railroad. Known as “Big Mike” by fellow railroaders, he took great pride in operating trains efficiently and safely, and even stopped two runaway trains during his career. Mike retired from the BNSF in 2003.Family was Mike’s priority and he took his job as a provider seriously. Always adventurous, Mike moved his family several places during his life. From playing on the beach in Charleston, South Carolina to cross-country skiing in Fairbanks, Alaska, he and his family took advantage of their surroundings and the outdoors regardless of where they landed.Mike had many passions and he was self-taught in most of his hobbies. He loved teaching his children anything they were willing to learn. Throughout his life, he enjoyed boxing, football, baseball, traveling, camping, fishing, hunting, photography, computers, reading, fly tying, gardening, bird watching and tying nautical knots for friends and family. His hobbies gave him common ground from which to strike up conversations with perfect strangers. However, teasing his wife and family was his favorite hobby of all.Because of his heritage, he loved all things Irish and traditionally watched The Quiet Man on St. Patrick’s Day…and any other day he felt like it. He will be remembered as a generous, affectionate, and strong individual who never missed a chance to laugh.Michael was preceded in death by his parents, sister, and brother. He is survived by his wife of 54 years, his children; Michael Jr. and daughter-in-law Cheryl Guy of Sheridan; John Guy and daughter-in-law Becky Bundy of Spearfish, South Dakota; Johanna Guy of Sheridan, Erin Nickerson and son-in-law David Nickerson of Big Horn, WY; and Daniel Guy of Sheridan. He is also survived by five grandchildren and two great-grandchildren.A Visitation will be held from 6:00 to 8:00 p.m. on Sunday, July 17, 2016, at Kane Funeral Home.Mass of the Christian Burial will be held at 10:00 a.m. on Monday, July 18, 2016, at Holy Name Church with Father Glenn Whewell officiating. Interment with Military Honors will be in the Sheridan Municipal Cemetery with a reception to follow in Knights of Columbus Building.Memorials to honor Michael may be made to the Sheridan Dog and Cat Shelter at 84 East Ridge Road, Sheridan, WY 82801 or to the The American Lung Association at 822 John St., Seattle, WA 98109.Kane Funeral Home has been entrusted with arrangements.