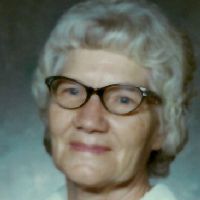 Mildred M. Russell passed away peacefully at Sheridan Manor in Sheridan, WY, on Tuesday, January 28, 2014 at the age of 98. She was born March 19, 1915, on her family\'s ranch south of Arvada, WY to Issac T. and Bernice (Rowland) Stott. She had 4 sisters and 5 brothers, who always affectionately called her Babe. She married Jasper E. Russell in 1933. They settled in Dayton, WY where she remained for the majority of her life. Together they raised 5 sons, and 1 daughter.Mildred was an avid reader, and a self educated Naturalist, who loved and understood the beautiful natural world in which she lived. In particular, she loved the mountains, birds, gentle animals, and flowers. She could identify birds by sight and song, and gained much pleasure from feeding and watching her feathered friends. She was a master gardener and her large yard on the banks of the Tongue River, was always filled with beautiful flowers. She enjoyed cooking for her grown children and grandchildren, and meals included vegetables from her bountiful garden. Her children will especially miss her homemade bread, baked pheasant and rice, and pancakes served with fried deer steak and chokecherry syrup.Mildred\'s faith in the Lord always gave her strength to face adversity with a calm demeanor and maintain a positive attitude. She chose to focus on the simple things which she held dearest, her family, children, birds, gardening, the beauty surrounding her, and never worried about or pined for things she did not have. Everyone who knew her recognized her as a kind and gentle soul, with strength of character, wisdom, intelligence, and calming influence on others. She was deeply concerned for the plight of orphans, and even though income was modest sent yearly checks to orphanages and St. Jude Children\'s Hospital. She was physically strong and in her 80\'s would walk a mountain trail in the Tongue River canyon, played sotfball with her grandchildren, and rode a horse. She was one of a kind, perhaps a representation of the other strong women who helped to settle the west in the early days of our country. If there is such a thing as an old soul, who is here as a role model to show others how to live an exemplary life, she is one.Mildred was preceded in death by her parents, siblings, and 2 sons, Jasper Jr., a Marine who was lost in the Korean War, and Bill who passed away in 2013 of natural causes. She is survived by 3 sons, Bob (Barbara), Jack, Don (Bonnie), daughter, Dr. Laine Russell (Danny Gorgol), daughter in law Larella, numerous grandchildren, great grandchildren, and great-great grandchildren.The family would like to thank and send our appreciation to Dr. Hugh Batty and the employees of Sheridan Manor, for the kind attention and loving care they provided Mildred the past 6 years.By Mildreds request there will be no services. There will be a family gathering at a later date. Memorials to honor Mildred can be made to St. Jude Children\'s Research Hospital at 501 St. Jude Place, Memphis, TN 38105.Kane Funeral Home has been entrusted with arrangements.