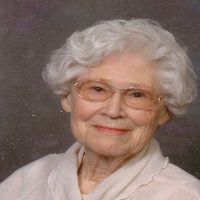 Minerva Sanderson, passed away May 15, 2016, she was born on July 10, 1918, in San Antonio, TX, to Angela (Cisneros) and Manuel G. Silvee. She grew up in Galveston, TX; was baptized at Central Christian Church at the age of 12 years. She graduated from Ball High School and enrolled in Droughn Business College where she took secretarial and accounting courses. She worked as her church secretary until she married John Albert Stafford on August 11, 1939. Together they had four children: Elsie A., Marvin G., and twins Michael S. and John S.The family moved to Tucson AZ, in 1949. Minerva attended the University of Arizona in the early 1960s and \'70s. After her husband, John, died on December 7, 1970, Minerva worked for several businesses in Tucson. She retired from Sears after working there 10 years.Minerva was a member of the Order of The Eastern Star and served as the Worthy Matron of her Chapter in Tucson in 1980.On November 23, 1981, Minerva married Wilmur V. Sanderson and went to live with him on his farm near Oxford, NE. She attended the Methodist church with him and became a part of his family. They were both retired so they did a lot of traveling. Wilmur died on September 25, 1994. Minerva then joined a nearby Christian church in Edison, Nebraska. She enjoyed the rural home until July, 2010, when she moved to Sheridan, WY, to be near her daughter, Elsie, and her husband, Terry Peters.Minerva became a member of the First Christian Church in Sheridan. Church had always been a very important part of her life as were her families. She enjoyed many religious retreats. She did some oil painting, knitting and sewing when she was younger. She enjoyed traveling, reading, attending and hosting many reunions for the Sanderson and Stafford families.She was preceded in death by her parents; both husbands; three brothers; nephew William Silvee killed in Vietnam; grandson James Peters; two great grandsons Thomas Peters and Anthony Peters and one great great grand daughter Genevieve Peters. Also, her brothers in law, Ray Ryland, John Anderson and Raymond Watsonand son in law Phil Houser. Including both families, she is survived by her children, Elsie (Terry) Peters of Sheridan, WY; Marvin (Mary) Stafford of Tucson, AZ; Michael (Ruth) Stafford of Days Creek, OR; John (Judy) Stafford of North Creek, NY; Rita Houser of Eau Claire, WI; and Rogene (Jim) Long of Newcastle, WY; her sisters Ruth Ryland of Steubenville, OH; Doris Watson of Dickenson, TX; and Lita Jean Anderson of Riverside, CT; thirteen grandchildren, seventeen great grandchildren and five great great grandchildren, many nieces and nephews.Services for Minerva in Sheridan, WY, will be held at 10:00 a.m. on Saturday, May 21, 2016, at the First Christian Church with Pastor Doug Goodwin officiating. There will also be a Visitation on Monday, May 23, 2016, from 4:00 p,m. To 8:00 p.m. with a family greeting from 6:00 p.m. to 7:30 p.m. at the Mitchell-Nelson-Bauer Funeral Home in Oxford, NE. A Funeral Service will be held at 2:00 p.m. on Tuesday, May 24, 2016, at the United Methodist Methodist Church in Oxford, NE, with Reverend Eldon E. Fablinger officiating. Burial will follow at the Oxford Cemetery in Oxford, NE.Memorials to honor Minerva can be made to the church of the donor\'s choice.Kane Funeral Home has been entrusted with arrangements.