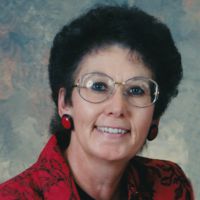 Myra Jean Asay Sessions (72) of Lovell, WY past away peacefully Wednesday, June 1, 2016 at the Billings Clinic in Billings, MT.  Myra was born July 26, 1943 to Joe and Legene Asay of Lovell, WY.  Myra grew up in Lovell, WY and married her high school sweetheart Larry Sessions.  They were married Nov. 10, 1961.  They raised six children, Todd, Max, Camie, Steve, Kevin and Melissa.  The highlight of her life was spending time with her family who adored her.  She enjoyed listening to music and doing crafts.  She was a devoted member of The Church of Jesus Christ of Latter-Day Saints.  She spend countless hours serving others and enjoyed teaching children primary songs.  She will be missed by her family and friends, along with those who had the opportunity to feel her special spirit.  She was preceded in death by her beloved parents, Joe and Legene Asay, her brothers:  Lenoir, Robert, and Douglas and many aunts and uncles who she loved dearly.  Myra is survived by her husband Larry, and their six children, Todd (Laura), Max (Kathy) of Utah, Camie (Tim) Benedict, Steve (Heather), Kevin (Carla), Melissa (Dan) Wolvington, all of Wyoming, twenty-three grandchildren, and seven great-grandchildren. There will be a public viewing on Monday, June 6, 2016 from 6:00 pm to 8:00 pm at Haskell Funeral Home in Lovell, WY.  Funeral Services will be held on Tuesday, June 7, 2016 at 10:00 am at the LDS Stake Center in Lovell, WY. She will be laid to rest at the Lovell cemetery in Lovell, WY.      Kane Funeral Home has been entrusted with arrangements.