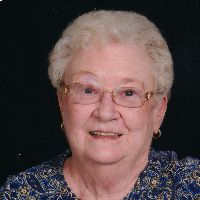 Myra M. Snider, 82, long time resident of Sheridan, WY, passed away on January, 6, 2018.Myra was born on May 1, 1935, in Ulysses, NE, to Horace and Mabel Eastabrooks.She was raised and attended school in rural Nebraska. She moved to Wyoming as a young adult and lived there the rest of her life.She married Don Snider on January 9, 1979 in Casper, WY. They lived in Sheridan, where she worked at Plainsman Printing and Supply for 38 years.She was an active and involved member of Trinity Lutheran Church.Myra enjoyed playing bridge and watching sports – especially the Sheridan Broncs, the Wyoming Cowboys, and the Denver Broncos. Myra’s greatest love was being with her family and doting on all of her grandkids and great-grandkids.She is survived by daughter Patricia Chappell, her grandchildren: Scott (Naomi) Baker, Troy (Bridgette) Baker, Rich (Tammie) Chappell, John Chappell, Tony (Sarah) Rodocker, John (Mabel) Snider, and Janel (Alfie) Ramos, and her 18 beloved great-grandchildren. She was preceded in death by husband, Don Snider, son, Wes Rodocker, her parents, her brother, Wendell, and her sister, Jean. She is missed by all.In lieu of flowers, Memorial gifts in memory of Myra Snider will directly support critical care and the Intensive Care Unit at Sheridan Memorial Hospital and may be sent to the Sheridan Memorial Hospital Foundation, PO Box 391, Sheridan, WY, 82801.Funeral Services will be held at Trinity Lutheran Church on Friday, January 12, 2018, at 10 a.m. with Pastor Phil Wold officiating. Burial will be in the Sheridan Elks Memorial Cemetery.Kane Funeral Home has been entrusted with arrangements.