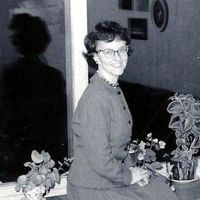 Nancy Jo Alexander Porter, 83, of Decker, passed to her reward on Tuesday, December 1, 2015, at the Westview Health Care Center. She was born in Kokomo, Indiana, February 12, 1932, to Farold and Josephine Stanton Alexander.  Nancy received a good education in Kokomo public schools through High School.  When she was 12 her brother Jerry was invited by a teenage friend to attend a neighboring church youth meeting. (Pilgrim Holiness) Jerry came with several brothers and sisters.  Nancy trusted Christ as her Savior that night and pressed forward to a lifetime of Christian service.  Nancy never again attended the Pilgrim Holiness church, but became active in her own church, the Bible Baptist, where she was baptized at age 12.  The pastor of Bible Baptist was Doctor John G. Balio who eventually became quite well known as a Bible scholar.  So, Nancy had an early grounding in creationism and eschatology. After High School, Nancy was encouraged by a friend and applied to St. Elizabeth\'s School of Nursing in Lafayette, Indiana.  The Head Nun asked Nancy why she wanted to be a nurse, she said, “She wanted to help people.”  That was sufficient.  She was accepted and was graduated with an R.N., in 1953.  For about a year, Nancy ran the aid station in a big Indiana factory dealing with injuries.  She liked it, but soon applied to Moody Bible Institute for a Bible education.  She was graduated there from the Missionary Course in 1957.  It was there she met her future husband, Hayden Porter.  The marriage lasted 58 years with three children, Bruce, Janelle and Amy.Nancy put herself through school by working as a nurse at Cook County Hospital.  Nancy was always active in Christian work.  At Moody, she toured widely with Moody Choral.  She remembered with delight singing in many churches, large and small.  One was the Cathedral of St. John the Divine (Episcopal) in New York.  Another was Sheridan\'s First Baptist when it was on the corner of Main and Coffeen.  Another was First Methodist in Mendota, Illinois as a solo.  Another was Grace Gospel Tabernacle in Bozeman.  She taught many vacation Bible Schools, Bible Camps (including Camp Bethel) and Bible Clubs.  Once she had a large Bible Club (all black) one at a time every kid accepted Christ as Savior.  In later years, Nancy was a member of Decker Berean Church for over 40 years.In her late 20\'s, Nancy took up oil painting, she gave them to family and friends, and sold many of them. In Alaska as a missionary she served at Lazy Mountain Childrens Home at Palmer.  She had as many as 8 children in her home (Indians, Eskimo, Aleuts).  In 1966 Hayden, Nancy and Bruce returned to the Ranch at Decker. Nancy continued to serve.  She taught Sunday School, served as School Nurse at Big Sky Bible College, and did substitute teaching and tutoring at Red Grade Christian Academy.Nancy is survived by her husband; Hayden, son: Bruce, and daughter; Amy, brother: Terry,  sisters; Judy, Jenny, Penny and Julie, along with three grandchildren; Amanda, Ethan, and Emily, and also numerous nephews and nieces.  She is preceded in death by her parents, brother Jerry, sister Sally and daughter Janelle.Memorials to honor Nancy can be made to the Calvary Chapel Sheridan, 606 S. Thurmond, Sheridan, WY 82801.A Memorial Service will be at 2:00 p.m. on Friday, June 17, 2016 at Kane Funeral Home. An Inurnment will be in the Sheridan Municipal Cemetery.  A reception will follow in the Kane Reception Hall.  Kane Funeral Home has been entrusted with arrangements.