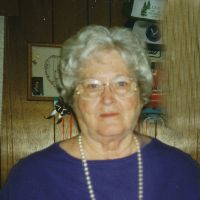 Nellie L. Kern, 89, of Sheridan, passed away on Tuesday, March 18, 2014 at the Sheridan Manor.Nellie was born on April 3, 1924 near O\'Neil, NE to parents David Coy and Leora (Crawford) Nelson. She attended grade school in Nebraska until her family moved to Buffalo, WY where she attended school for three years and then she graduated from Sheridan High School in 1944. After graduation she attended the University of Wyoming. She married Joseph E. Kern on February 26, 1947 in Hardin, MT. They had two sons; Carroll Dennis and Edward Joseph.Nellie taught school at Soldier Creek for a year. She worked at Woolworth\'s in Sheridan then spent four year\'s with State Home and Training School as an attendant in Wheatridge, CO. She then went to work for the Coor\'s Company in Golden, CO for twenty four years until she retired in 1982.Nellie enjoyed handicraft work; embroidery, crocheting, quilting, and the designing and making of clothing for herself and her family.Nellie was preceded in death by her husband of fifty plus years, her son, Carroll D. Nelson, three brothers; Delbert, Dwight and Virgil and three sisters; Ila, Verda, and Aldolfena. She is survived by one son, Edward Kern, a brother, John Nelson, twogranddaughters; Kristy, and Sherry, four great grandchildren, and many nieces and nephews in and around the area.Services for Nellie will be held at 1:00 p.m. on Friday, April 18, 2014, at the Oregon Trail State Veteran\'s Cemetery in Evansville, WY with Chaplain Bruce Sell officiating.Kane Funeral Home has been entrusted with arrangements.