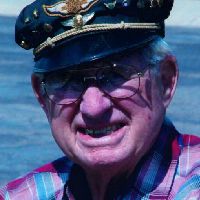 Nels Albert Nelson Jr was born on June 8, 1917 in North Mankato, Minnesota to Nels Albert (Sr) and Serine Hansen Nelson joining his sister Marguerite. Nels was called to his Heavenly Home on October 29, 2016, just 14 days after he and his wife Ellen’s 75th wedding anniversary.Construction was in his blood. Both his father and grandfather were builders. The family moved to Los Angeles in 1923 where Nels Jr’s father was hired to build 5 High Schools. They moved to Appleton, Wisconsin in 1931 where his sister Signora was born. All three children were confirmed in the Lutheran Church in Appleton. They moved to Mitchell, South Dakota in 1932 where Nels Jr was to begin his career in the business of building. He was hired as a water-boy for a crew building the Roxie Theater. To his disappointment he was paid in theater tickets.Nels Jr found a bushel basket of parts and pieces of a 1929 Harley Davidson motorcycle in the back yard of the motorcycle dealer in Mitchell. The dealer said he still owed the factory $35 on it. Nels Jr offered to trade a battery charger, an old Oliver typewriter and $32.50 for it. Reluctantly the dealer accepted, but did not offer any help or assistance in reassembling it. After several attempts, and finally with no parts left over, the motorcycle roared to life. He and his sister Signora rode that Harley to the 1939 World’s Fair in New York City.The family moved to Rapid City, South Dakota where Nels Jr worked for Northwestern Engineering Co. In 1938 he graduated Cum Laude from Rapid City High School where he had also worked as a labor foreman building the new High School. He and his father were sent to Sheridan soon after to build the Waste Water Disposal Plant. His dad started N A Nelson Construction Co on March 23rd, 1940. Nels Jr returned from professionally racing motorcycles for Harley Davidson to join his father. They moved into their new office at 731 N Main in April of 1941. Nels married his High School sweetheart, Ellen Lorraine Kulesza from a ranch in South Dakota, on Oct 15, 1941.When World War II was declared most private work stopped. Nels Jr went to work for Metcalf-Hamilton-Kansas City Bridge Co in Cody, WY on the Heart Mountain project. That company then moved him as a supervisor to begin a V A Hospital in Topeka, Kansas. He enlisted in the Army Air Corp in 1942 and was sent to Embry Riddle School of Aviation for training in Electrical Engineering on C46’s and C47’s used for troop transportation.Nels Jr was sent to the South Pacific with the 13th Air Force-South Pacific, 63rd Troop Carrier Squadron, 403rd Troop Carrier Command to begin the trek north toward Japan with the 18 planes he serviced. World War II ended. Nels Jr was honorably discharged from the Service after 7 Battle Campaigns and 30 months in the South Pacific. Only one of his planes was put out of service while awaiting maintenance in an early morning strafing of that air field.Nels Jr retired from N A Nelson Construction Co at the age of 86 after many years of residential, commercial and Interstate bridge building. Nels Jr enjoyed his motorcycle experiences, being friends of “Pappy” Hoel, Walter Davidson and many fellow riders. He was inducted into the Sturgis Mortorcycle Museum’s Hall of Fame in 2007 as the recipient of the J C “Pappy” Hoel Outstanding Achievement Award. He was a member of Trinity Lutheran Church for 72 years. He was a 19 year member of the Whitney Board, a 50 year member of the NRA, a member of the Plant and Property Committee for the YMCA, the American Legion and the Elks Club. He dearly loved and his wife of 75 years, and his family.He is survived by his loving wife, Ellen L Nelson, sons Dr Nels (Doc) A Nelson III (Joylene), Brad, and Brett (Leanne) all of Sheridan, Granddaughters Nicole Nash (Aaron), and Brittany Nelson both of Sheridan, great Grandchildren Brody and Ellie Nash of Sheridan and Brogan Nash of Red Deer, Alberta.Per his request no services will be held.Kane Funeral Home has been entrusted with arrangements.