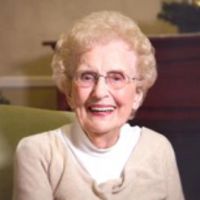 Nina Ruff Crandall , of West Chester, PA, formerly of Overland Park, KS died on Wednesday, March 5, 2014 at her daughter\'s home in West Chester. She was 99. She was born in Snowball, AR on August 1, 1914 to Seth S. and Maggie (Hensley) Ruff. She grew up in Harrison, AR and in her youth was known as \"Speedy Ruff\' on the basketball court. After finishing high school, she moved to Sheridan, WY to live with her Aunt and Uncle and attend Business College. She worked as a bookkeeper and cashier for Mountain States Telephone until 1938 when company policies at the time required married women to retire. Nina and Ralph were married in the fall of 1938. Together they were enthusiastic square dancers and participated in local civic activities. Over the next 41 years, they resided in 5 states (WY, IA, WV, TX, OK) and 2 foreign countries (Mexico, Australia) as Ralph was transferred for his work as a Chemical Engineer with Phillips Petroleum. They retired in Bartlesville OK. Nina was an avid traveler and often said that she had been around the world twice. Nina enjoyed playing bridge, listening to music, doting her great grandchildren, and corresponding with the many acquaintances she made throughout her travels. She excelled at making and keeping friends -and never let one drop by the wayside. She was a member of Westminster Presbyterian Church in West Chester, PA. She was preceded in death by her husband, A. Ralph Crandall, her brother Delmar \"Jim\" Ruff of Riverside, NJ, her half-brothers B.F. Ruff of Harrison, AR, and Danny Ruff of Silverdale, WA. She is survived by her daughter, Carol Edwards and husband Richard of West Chester, PA; her grandchildren Megan Wesner and husband Nathan of Lafayette Hill, PA, and Brian Edwards of West Chester, PA; her great grandchildren Audrey and Jonah Wesner, and her half-brother Seth Ruff of Harrison, AR. In addition to her large extended family of nieces, nephews and cousins, she is survived by her loyal friend Irvie Hoffman of Dallas, TX and her many friends at Barclay Friends Home in West Chester, PA and the Simpson Meadows retirement community in Downingtown, PA.Interment will be held at 11:15 on Friday, March, 14, 2014 in the Sheridan Municipal Cemetery with Pastor Don Derryberry officiating.Kane Funeral Home has been entrusted with local arrangements.