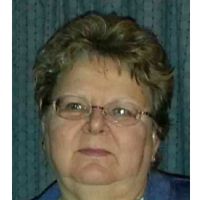 Noreen A. Gould, 60, of Ranchester, passed away on Monday, July 28, 2014 at the Westview Healthcare Center.Noreen was born on March 10, 1954 in Aberdeen, SD, to parents Louis and Avenella (Wilcox) Doell. She graduated from Newcastle, WY High School. She married Thomas Jay Gould on July 16, 1974, and just celebrated their 40th anniversary.Noreen enjoyed motorcycling, hunting, camping, fishing, 4-wheeling, arts and crafts, and being with family and friends. She was a very caring person, a great cook, a natural horse woman, and never had a cross word with anyone. She loved her family more than anything.Noreen worked as a Nurses Aide at the VA Hospital for thirty two years, and at Kennon Products. She was Secretary for Northern WY Walleyes Unlimited and a member of the Catholic Church.Noreen is survived by her parents: Avenella and Louie Doell, of Newcastle, WY, husband, Tom, her children: Timothy Gould of Sussex, WI, and Kenneth J. (Rhonda) Gould of Sheridan, WY, siblings: Brenda (Tom) Russell of Cheyenne, WY, Louis (Christine) Doell, of Newcastle, WY, Shawn (Keith) Zabka, of Cheyenne, WY, Crystal (Jeff) Lincoln, of Boise, ID and her grandchildren, Christopher and family, and Heather (Jason). She was preceded in death by her daughter in law, Frances Gould, a baby sister, and her paternal and maternal grandparents.A Rosary for Noreen will be held at 10:00 with Services to follow at 11:00 on Saturday, August 2, 2014 at St. Edmund\'s Church in Ranchester with Father Brian Hess officiating. A reception will follow at the Ranchester Community Center.Memorials to honor Noreen may be made to the Sheridan Senior Center at 211 Smith St., Sheridan, WY 82801.Kane Funeral Home has been entrusted with arrangements.