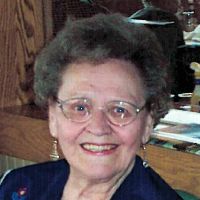 Mary “Norma” Leis, 98, died at the Sheridan Manor on December 14, 2016, from complications of a hip replacement.Mary Norma was born the 4th child in the family of six children to John Henry Reisch and Hazel Lorette (Brown) Reisch on July 6, 1918 in Iverness, MT. She was baptized in Our Lady of Ransom Catholic Church in Hingham. MT. When she was 6 years old she moved with the family to Campbell County, Wyoming. She attended rural schools and graduated from Campbell County High School. Norma was a country school teacher after high school.The summer of 1939, she met Carl Leis at a dance at Bruno\'s night club north of Sheridan. She refused to dance with him until he took off his hat. On October 26, 1939, she married Carl Leis in Sheridan Wyoming. They lived in Hill City, SD, for a short time. They returned to Sheridan and purchased a small two bedroom house where they spent their entire married life. Norma and Carl opened their home to her sister, Lucille and John Reisch, her father, after he was a widower. While 3 of Norma\'s brothers were serving overseas in WWII, Norma and Carl opened their homes to their wives. Later Norma open her home and her heart to two nephews and two nieces. She always stressed her mother\'s advise,\"We have to pay the bills first, kids.\"Norma was active in the VFW Auxiliary and traveled extensively as an officer to state and national convention. She also was an officer in the American Legion and Eagles Auxiliaries. Norma was very active in her husband\'s saw sharpening business. She enjoyed the bookkeeping for these organizations.Norma gave many \"pound puppies\" a happy home until they crossed the Rainbow Bridge. The Sheridan Dog and Cat Shelter was her favorite charity.She is preceded in death by her husband Carl, her brothers, Elmer, Marvin, Jack and Floyd, two nieces and one nephew. She is survived by one sister, Lucille Shorten of Billings, five nieces and nephews.Burial will be next to her beloved husband, Carl in the Elks Section of the Sheridan Cemetery at 2:00 p.m. on Tuesday, December 20, 2016, with Father Glenn Whewell officiating.Memorial gifts may be sent to the Sheridan Dog and Cat Shelter, 84 East Ridge Rd., Sheridan, WY 82801, or Sheridan Meals on Wheels program, 211 Smith St., Sheridan, WY, 82801, or to the charity of the donors chose.Kane Funeral Home has been entrusted with arrangements.