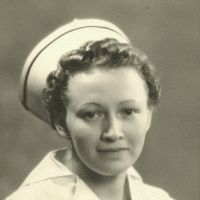 The third of seven children born to Ellen Renlund Luoma and John Luoma, Loma grew up on the family ranch near Luther, Montana. She carried the memories and lessons of the depression years throughout her life, and was one of the last of a generation who lived their values: frugality, practicality and a strong work ethic.She, along with her siblings, rode their horses three miles to the Volney schoolhouse and often reminisced about the bitterly cold winter morning when she rode to school alone only to retrace her steps when the teacher failed to arrive. This was indeed an early indication of her devotion to her education.During the summers Loma drove teams of horses in the hay fields, raking hay and operating the stacker. She also worked for her Grandfather herding sheep as a nine-year-old child. Other chores were milking and helping her Grandmother and Mother churn butter, cook and preserve produce from the garden. She never lost her love of gardening and canning and showing off her pantry full of jellies, fruit and vegetables, which gave her great pleasure in the last years of her life. She will be remembered by many for her chokecherry jelly, green tomato relish and pickled beets.When Loma completed grade school, money was scarce and her family was unable to afford for her to attend high school. By that time she had set her sights on becoming a nurse, so with characteristic determination she found work with a teacher and family and graduated from the Red Lodge High School in 1936.With a $50 loan from her beloved Grandmother Amanda, Loma rode the train from Billings to Sheridan and enrolled in the Nurse\'s Training Program at the old hospital on Saberton Street – a shy timid nineteen-year-old. She completed her studies in the winter of 1939-1940 earning the second highest overall score in the State Boards.Two of her happiest years of her life were spent in Denver working at St. Joseph\'s Hospital and sharing an apartment with best friends, Garna Long Taggart and Lonnie Blum.During training in Sheridan a young cowboy was brought into emergency for an appendectomy and Loma helped with the prep for surgery. Two weeks later that same cowboy, T.A. “Bert” Stout, asked her on a date. He courted her the two years she spent in Denver and they were married in Cheyenne on March 12, 1942.When Bert enlisted in the Navy Loma traveled to Texas and California with him and easily found work in area hospitals. When he was shipped overseas, she returned to Sheridan and continued nursing.After the War, Loma and Bert moved to and eventually purchased the family ranch on Prairie Dog. After their three children were born Loma returned to nursing and worked at Sheridan Memorial Hospital. She helped with the “big move” from the old facility on Saberton to the new building on West Fifth Street and worked the first shift in Emergency. Many satisfying years were spent nursing and she was assistant supervisor at retirement.Baking, gardening, canning, sewing quilts and knitting were favorite hobbies along with watching bull riding and ice skating on the television. But fishing topped the list, and provided her with countless memories.Loma enjoyed traveling and took numerous trips as a Wyoming Wayfarer along with visits to British Columbia. One very special journey was taken with her sisters Sylvia Rintala and Mae Claypool along with her brother-in-law Clay. They visited cousins in IsoKyro, Finland where Loma\'s Father had been born.It was a full and long life well lived. Loma was a charter member of the Carriage House Auxiliary, a member of the Methodist Church and was preceded in death by her ex-husband Bert, her parents, four brothers, and a sister.Survivors include: Great-Grandsons Finn and Leiv; Grandson Eirik and wife Kate of Roberts, Montana; Grandson Joe of Billings, Montana; Granddaughter Amy and husband Jared of Missoula, Montana; Son Thomas A. of Sheridan; Daughter Sahnte and husband John Evans of Tatla Lake, British Columbia; Son John R. (Randy) and wife Ginger of Big Horn, Wyoming. Other survivors include one sister, Mae and husband Clay Claypool of Colfax, Washington, sister-in-law, Lois Luoma of Luther, Montana, four nieces and 3 nephews.Loma also leaves behind many dear friends and neighbors and she loved and appreciated you all.We will miss her gorgeous and generous spirit as well as her beautiful smile.A Celebration of Life will be held in the Spring.Please feel free to honor her life by gifting the Virginia Reed Nursing Scholarship c/o Sheridan College Foundation, Box 6328, Sheridan, Wyoming 82801.Condolences may be sent to Box 6628, Sheridan, Wyoming 82801, or to Kane Funeral Home website at www.kanefuneral.com.Kane Funeral Home has been entrusted with arrangements.