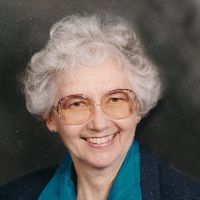 Patricia (Pat) Louise Fosher passed away at Westview care center on Monday, March 5, 2018. She was born February 25, 1931, in Hasting, NE to Norval and Velma (Rosenberg) Terry. She later moved to Colorado and then to Laramie WY. She met and married Dann Allen Fosher when they were both in college at the University of Wyoming. They were married December 29, 1949.Dann worked for the Soil Conservation Service so they moved around the state of Wyoming before retiring in Story, WY. Throughout her life, she was a secretary starting with working for a surveyor in Big Piney, WY and later working as a legal secretary. Pat was basically a paralegal, before there were paralegals! She worked for Morgan and Brorby in Gillette and later for an attorney in Evanston.After retiring to Story, Pat became a potter and made “Pots by Pat”. She has pottery all over Wyoming, including many pieces around the Sheridan area. We hope you will remember her fondly every time you use your pottery or dinnerware. She was commissioned by the State of Wyoming  to make the Centennial Plate for Wyoming’s 100th anniversary. After retiring from pottery she became a quilter. She made many lap quilts for the VA and enjoyed visiting the Vets there. She also worked as a hospice volunteer.Throughout her life Pat enjoyed the outdoors and went camping, hunting and fishing with her family. She was always involved in something to help others. She was a 4-H Leader for many years, helping both her children and many others to grow and succeed in their many projects. Pat loved to sing and had a wonderful voice. She sang for weddings, funerals and many other functions when she lived in Gillette. She and her sister sang many duets together.  Dann and Pat traveled within the US quite extensively. They went to Tucson, AZ for many years. They traveled to Alaska, both the West and East Coast and to many National Parks.Pat was preceded in death by her parents, Norval and Velma Terry, her step father Ed Coomler and her son in law, Bill A. Mentock. She is survived by her husband Dann, of Story, sister Jeannie Roelfsema (Gene), son Glenn A. Fosher (Dee Klein) of Gillette, daughter Karen Fosher of Sheridan, and numerous grandchildren, great grandchildren, nieces, nephews and cousins.Services will be at the Story Community Church at 10:00 a.m. on Wednesday, March 14, 2018, with Pastor John Constantine officiating. A Reception by the Story Womens Club will follow at the church. Donations can be made to The Story Community Church, 4 Ponderosa Dr. PO Box 415, Story, WY 82842 or Day Break at the Senior Center, 211 Smith Street, Sheridan, WY 82801. Kane Funeral Home has been entrusted with arrangements.