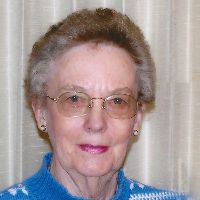 Patricia Jean Soloman passed away in Sheridan, Wyoming on August 14, 2017. She was born on January 28, 1927 in Midwest, Wyoming to Loyd and Estella (Garrett) Mapes. She was proceeded in death by her parents; a twin brother, daughter, Sally Joan and sister, Julia Lane.She attended Torrington schools before moving to Portland, Oregon where she graduated from Lincoln High School. She married Gale Soloman on March 16, 1946. They lived in Fort Laramie for two years before moving to Midwest in 1946 where they resided until moving to Casper in 1962 and then to Sheridan in March, 2012. Pat lived at Sugarland Ridge in Sheridan where she made many good friends among the staff and residents.Pat retired as a medical assistant for seventeen years for Donald Mahnke, MD. She was a member of the Christian’s Women’s Club, Piece by Piece Quilters and Granny Golfers. She was a very talented quilter whose quilt won Sweepstakes, Judges’ Choice, First Place and the Mountain Mist award at the Natrona Country Fair and second place at the Wyoming State Fair. She was also very pleased to have her recipe for Chocolate Peanut Butter Parfait printed in the June/July 2008 issue of Taste of Home magazine.Pat enjoyed many golfing trailer trips with her husband and friends to various golf courses in the area. She spent many days at the family cabin which they built in 1973 with the help of friends and family. She was active at the United Methodist Church in Casper and loved the Lord. She is survived by her daughters, Gayla Rowley and husband, Clay of Sheridan, Wyoming; Connie Mahaffey and husband, Gary of Houston, Texas, Carol Jepsen, who was like a daughter to her, of Surprise, Arizona; grandchildren, Steve Rowley, Kristen Mahaffey and Brenton Mahaffey and step-grandaughter, Leslee Rowley Richardson. She has two great grandchildren, and three step-great grandchildren. Cremation has taken place. At her request, a private gathering will be held at the family cabin to scatter Pat’s ashes to join her husband’s ashes.The family requests in lieu of flowers, donations be made to Central Wyoming Hospice, 319 South Wilson Street, Casper, Wyoming 82601 or to the Sheridan Senior Center, 211 Smith Street, Sheridan, Wyoming 82801.Kane Funeral Home has been entrusted with arrangements.