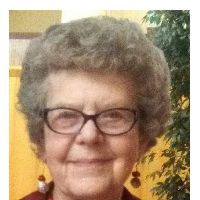 Patricia “Patty” Warner died Tuesday night, June 17, 2014. She was born to Walter K. and Gretchen Gimple Nelson, October 21, 1926 in Boulder Colorado, where she attended High School and College. At the end of WWII she married her high school sweetheart, Curtis “Bud” H. Warner. In the early 50s they left the Boulder area, as it was getting too crowded and the Mountains they loved too full of people. They traded the Rockies for the Big Horns and moved with their three children, Bonnie, Kenny and Cindy to Sheridan and ultimately Big Horn. Patty was mother and homemaker while the kids were in school. She later worked at Stevens Fryberger, officially in the Men’s Department, but her passion was creating the window displays for the store. When Stevens Fryberger closed she turned her attention to volunteering at the First United Methodists Thrift store “The Closet”.She loved the outdoors, camping and picnicking on Red Grade. She loved sunflowers and roses, mountain blue birds and meadowlarks. She loved the color Red and anything Chocolate she didn’t like. She created beautiful beaded necklaces. She approached life with a spirit of fun and adventure. She was a beautiful woman, inside and out. Her love for family and friends was as perfect as her appearance.Her husband, Bud preceded her in death in 2004. She will be missed by her children; Bonnie Warner Dyer (Terry) now living in Tahoe City CA, Ken Warner (Pat), now living is Poulsbo Wa , and Cindy Warner Phillip (Dick), now living in Riverton Wy. She had three Grandchildren, Michael Phillip, Kelly Phillip and Darcy Dixon Drury. Patty also leaves behind her loving friend and companion Victor Garber.In lieu of flowers, donations can be made to: The Closet, c/o The First United Methodist Church, 215 W Works Street, Sheridan, Wy 82801. A memorial service will be at the First United Methodist Church on Saturday June 21, 2014 at 2 pm.Kane Funeral Home has been entrusted with arrangements.