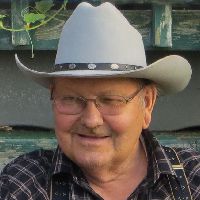 Paul William Blackley, 85, of Sheridan, passed away on Wednesday, February 11, 2015, at his residence. He was born on December 28, 1929, to parents Daniel and Elizabeth (Booker) Blackley in Great Falls, MT. He graduated high school in 1947 and joined the Marines in 1948.Paul married Marelyn Pettapiece in 1949 in Great Falls. They lived in Cascade, MT, where Paul worked on a ranch. Later Paul went to work for Great Falls Implement setting up machinery and mechanicing. In 1967, John Deere and Company opened a Western Division in Denver. They asked Paul to be District Manager for WY, MT, NE, ND, and SD in 1968. Deere and Company moved Paul and the family to Sheridan, WY, where he and Marelyn bought land outside of Sheridan at the base of the Big Horn Mountains and built a ranchette with cows, pigs and chickens.Paul continued to work for Deere and Company driving thousands of accident free miles. He retired from the company in 1984, but continued to work for John Deere Dealers until 1987. He then ranched and put up hay.Paul spent countless hours on the computer and traveling to small towns researching his family geneology. He was ditch rider for the Meadowlark Subdivision for many years making sure the ditches were clean and everyone had water.Paul lived his life believing nothing runs like a Deere! He was a true neighbor and would help anyone. Paul also loved camping, fly fishing and hunting. He and Marelyn celebrated 65 years of marriage in August at their home with family and friends.Paul was preceded in death by his parents and son, Danny. He is survived by his wife, Marelyn, daughter, Zella (Steve) Short of Rapid City, SD, son, Mark (Sue) Blackley of Story, WY, son/grandson, Nathan (India) Blackley of Eugene, OR, grandson, Ryan (Kendra) Short, of Rapid City, SD, granddaughters, Amanda (Mitch) Stenkamp of Aurora, CO, Amy (Pete) Galvan, of Ft. Stockton, TX, great grandsons, Estevan, Kadin, Braxton and Braedon, sisters, Betty Lou Lehrman, Virginia Dunstan, eight nieces, one nephew and his faithful friend and companion, Charlie.Services for Paul will be held at 10:00 on Wednesday, February 18, 2015, at the First Congregational Church with Pastor Sykes officiating. Interment will follow in the Mount Hope Cemetery with Military Honors. A reception will be held at the Big Horn Women\'s Club.Memorials to honor Paul may be made to the Elks Lodge, 45 W. Brundage, Sheridan, WY 82801 or to the Donor\'s Choice.Kane Funeral Home has been entrusted with arrangements.