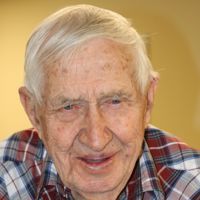 ‍Paul John Jolovich, Sr., 91, of Sheridan, passed away on May 15, 2017 at Sheridan Memorial Hospital.Paul was born on December 10, 1925 in Dayton, Wyoming to parents John P. & Susie (Legerski) Jolovich.  He grew up in Dayton, Wyoming and lived there for most of his life. He joined the Navy on November 3, 1944 and served on the NTS San Diego, the USS Hamilton, the USS Chepachet & the USS PC487 ships as a Seaman 1st Class. He earned the American Campaign Medal, the Asiatic-Pacific Medal and the WWII Victory Medal during his service. He was honorably discharged in Charleston, SC on June 13, 1946.Paul married Donna Mildred (Hockley) Allen on March 31, 1952. They raised three sons, Robert V. Allen, William L. Allen and Paul J. Jolovich Jr. They had almost 46 years together before Donna passed away on February 7, 1998.Paul was a carpenter by trade and helped build many of the buildings and schools around Wyoming, including the original Tongue River High School. He enjoyed fishing, hunting, reading, watching birds, and gardening, having a huge acre garden at one time.Paul fell in love again and married Betty Love on May 21, 2002. They were like teenagers in love when they were dating. Their marriage lasted almost 15 years before Betty passed away on March 22, 2017.He is preceded in death by his parents, both of his wives, sisters, Rose Goodman, Betty Vine, Agnes Janney and brothers, Joe, John Jr, Rudy, Frank, and Donald Jolovich and step-son-in-law, Edward Jolley.He is survived by his sons, Robert (Jackie) Allen of Ranchester, WY, William (Shirley) Allen of Rapid City, SD and Paul (Jackie) Jolovich, Jr. of Sheridan, stepdaughters Beverly (Roger) Reinke of Sheridan, WY, Sandra Jolley Love of Sheridan, WY, and Janice (Gene) Tenold of Rapid City, SD and stepson Matthew L. (Patricia) Love Sr. of Gillette, WY. Brothers George (Joanne) Jolovich of Indiana, Ed (Alyce) Jolovich of Torrington, WY and sister Mary Adamson of Sheridan WY. He is also survived by grandchildren, Tara (Tyler) Wilcox of Rapid City, SD, Jessica (Scott) of Casper, WY, Clinton Allen of Sheridan , Jordan (Chris) Dempsey of Sheridan, Matthew (Mary) Jolovich of Sheridan & Janelle (Jason) Crivello of Sheridan as well as numerous great-grandchildren, great-great grandchildren and nieces & nephews who were very fond of him.There will be a viewing at 9:00 am on Monday, May 22, 2017 at Kane Funeral Home with the service to follow at 10:00 am with Military Honors. A Luncheon reception will be held at the First United Methodist Church, 215 W. Works Street following the service. Inurnment will be held at a later date.Memorials to honor Paul can be made to Our Camp, Inc., P.O. Box 51353, Casper, WY 82605-1353 Attn: Jessica BaxterKane Funeral Home has been entrusted with arrangements.