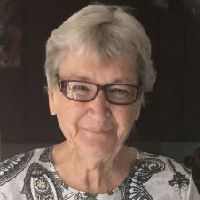 Paula Jean Nayes, age 78, of Sheridan, passed away Jan. 9, 2017, at Valley Medical Center in Renton, Wash., after complications from leukemia.Paula was born to Paul and Margaret Farman on Dec. 13, 1938, in Sheridan. Paula grew up in Wyola, attending grade school in Wyola and high school in Lodge Grass. After graduation, Paula went to beauty school in Billings. It was during this time she married her first husband, Danny McCausland. Their union was blessed with a son and daughter.Paula also lived in Forsyth and briefly in Hollywood before returning to Wyola with her two young children and setting up her own beauty shop. She married Alex Nayes in 1967, and that union was blessed with two daughters. Paula and Alex also had a foster son. Paula and Alex were ranchers and farmers in Wyola. Paula also had positions in the Wyola schools as an aide. Paula and Alex raised five children before semi-retiring in Forsyth. After the passing of Alex in 2004, Paula moved to Sheridan in 2006. It was there she lived until recently moving to Kent, Wash., to be closer to family.Paula is survived by her five children, Dana (Robert) Pace, Raymond (Tracy) McCausland, Brent Brooks, Amy (Rick) Fred and April Nayes; her brother Gary (Bonnie) Farman; grandchildren, Vance Raymond, Chelsea (Tom) and Ben (Randi) McCausland, Raynee Clairmont and Rostyn (Kortnee) Pace; and great-grandson, Holden McCausland.Paula was a true liberal who loved President Obama and enjoyed talking politics. She was very knowledgeable of world affairs, and not a day went by that she did not finish the crossword puzzle in the newspaper. Her children learned not to call her during \"Judge Judy\" or \"The Ellen Degeneres Show,\" and she kept up with \"Little People\" and \"Dog the Bounty Hunter.\" Paula loved staying in touch with everyone through Facebook and was lovingly teased by her grandchildren for her rapid responses to their text messages.A Celebration of Life Gathering with a casual lunch will be at 10:00 on Wednesday, July 5, 2017 at the Kane Funeral Home Reception Hall.All Memorials may be sent to the American Breast Cancer Foundation (abcf.org) in Paula’s name.Kane Funeral Home has been entrusted with arrangements.