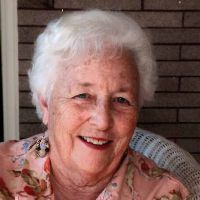 Peggy Ellen Kelsey, 79, of Sheridan, passed away on Thursday, December 15, 2016, at her residence.Peggy was born on December 1, 1937, in Sheridan to parents Cecil Ralph and Doris Ellen (Miller) Myers. She went to Pine Butte School in Montana grades one through eight, and graduated from Big Horn High School in Big Horn, WY. She married Dade R. Farman and together they had four children; Debbie, DeeVonne, Wade and Shana.Peggy worked for a dentist, The Coil Factory, JM McDonald, and twenty five years at the Wyoming Sawmill before retiring in 1991. She married Bill M. Kelsey on November 15, 1986, in Sheridan and was married for twenty one years and had four stepchildren.Peggy enjoyed flower gardening, raising violets, playing pinnacle and crafting with her daughters.Peggy was preceded in death by her parents, husband and sister, Patsy Hanslip. She is survived by her children, Debra (Mike) Hanson, DeeVonne (Mike) Degel, K. Wade (Crista) Farman, Shana L Dunivin, brother, Harold “Hap” (Carol) Myers, 10 grandchildren and 6 great grandchildren with one on the way.Memorials to honor Peggy may be made to Sheridan Senior Center, 211Smith Street, Sheridan WY, 82801 or to the Welch Cancer Center, PO Box 391, Sheridan, WY 82801.Per her request no services will be held.Kane Funeral Home has been entrusted with arrangements.

Date:
Start Time:
Per her request no services will be held.
Location:
Service VideoService Brochure