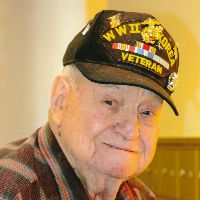 View Service FolderPhilip “Pete” Maxwell Welty, 95, of Sheridan, passed away on Monday, November 27, 2017, at his residence.Pete was born on September 10, 1922, to Nova B. and Sinah M.(Feely) in Freedom, OK.He graduated from Freedom High School and Signal School Marine Corp Base in San Diego, CA. He served as a Cpl. P.M. Welty 8th Marine Unit which raised the U.S. Flag on Iwo Jima, in 1945, World War II. During this time he suffered multiple shrapnel wounds from a hand grenade. He received the Purple Heart, wounded in action. He was later called back to fight in the Korean War, and the Vietnam War.He was married Barbara Lee from 1948 to 1953, Ruth Chamblin from 1953 to 2007, and Lilas Cox in 2010. He worked for the U.S. Government Ordinance. He enjoyed hunting, fishing, and a rare rifle collection. He owned two small farm operations; custom farming in Pueblo, Manzanol, Ordway CO.Pete was preceded in death by his parents, Nova and Sinah Welty, seven siblings, Jason, Della, Ruth/Ruby (twins) Charles “Jack”, Thomas (Pod), Cleo. He is survived by his daughter Trudy Welty and brother Lewis (Miriam) Welty, and several nieces and nephew.Pete wanted to be remembered for his smile and laughter.A Celebration of Life with Military Honors will be held at 10:30 am on Friday, December 1, 2017, at the Sugarland Ridge Brookdale Apartments, 1151 Sugarland Dr., Sheridan.Memorials to honor Pete can be made to the National World War II Museum, 945 Magazine St., New Orleans, LA 70130.Kane Funeral Home has been entrusted with arrangements.