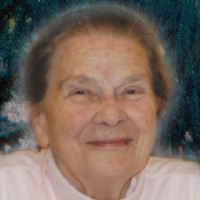 Phyllis Elin Townley, daughter of John H. and Elna A. (nee Blomquist) Schmeusser, born in Wilmington, DE on May 17, 1922 and currently residing in Sheridan, WY, died on Tuesday, April 22, 2014.During WWII, Mrs. Townley worked for the War Department in Washington, DC. After which, she worked for the DuPont Company and for Bell Telephone as a telephone operator in Wilmington, DE. She was an active member of the Aetna Fire Company Ladies Auxiliary in Newark, DE for many years. She retired after 20 years from Emily Bissell Hospital and in 1982, she and her husband, Jim, moved to Kalispell, MT where she worked for several years at Kalispell Regional Hospital. She and her husband returned to Wilmington, DE in 1996 to be near their children. Mrs. Townley assisted her husband in publishing a military newsletter, as requested by members of his Naval Unit, for 17 years.Mrs. Townley was preceded in death by her husband of 61 years, James Quinn Townley, on 3/15/2004, and by her brothers; John (Nonnie) H. Schmeusser on 7/25/1957, Fred E. Schmeusser on 6/23/2006 and Paul (Buddy) R. Schmeusser on 10/30/2010.Phyllis was a life-long member of the Old Apostolic Lutheran Church. She was a beloved wife, mother, grandmother, great-grandmother and great-great grandmother and raised their children in Newark, DE. They enjoyed many visits with friends in faith at their simple home in Roseville Park and traveled the country and Scandinavia to visit friends and attend the Christian meetings.Mrs. Townley is survived by her sons, Trent J. of Sheridan, WY, David Q. (Vicki) of Jacksonville, FL, Philip D. (Deborah) of Duncannon, PA, Jon P. (Margaret) of Middletown, DE, Rand E. (JoAnne) of Davenport, WA and Dana L. (Rhesa) of Yacolt, WA; daughters, Gaye E. Koski (Don) of Sheridan, WY, and Phyllis A. Granger (Stanly, Jr.) of Rising Sun, MD; 35 grandchildren, 154 great grandchildren and 9 great-great grandchildren.Visitation will be from 6:00 to 8:00 p.m. on Thursday, April 24, 2014 at the Old Apostolic Lutheran Church at 111 Metz Road, Sheridan, WY, followed several days later at Old Apostolic Lutheran Church at 2038 Pleasant Valley Rd, Newark, DE. Funeral services will begin at 10:00 a.m. on Thursday, May 1, 2014 at the church, with interment in Delaware Veterans Memorial Cemetery, Bear, DE immediately following the funeral.In lieu of flowers, contributions may be made to Old Apostolic Lutheran Church.