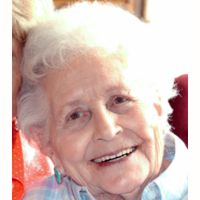 Ramona Jean Kukuchka, 84, of Sheridan, passed away on Saturday, January 4, 2014 at the Sheridan Memorial Hospital after a short illness. Ramona was born April 1, 1929 in Sheridan, WY to Thomas Strutzman and Kathryn Ann (Zucca) Strutzman.Ramona attended Holy Name School, graduated from Holy Name in 1943 and then attended Sheridan High School and graduated in 1948. She met Eddie Kukuchka and they married at Holy Name Catholic Church on November 12, 1949. The new Mr. and Mrs. Kukuchka made their home in Big Horn where Eddie worked on the Wallop Ranch. In 1952 they moved to the Kukuchka Ranch in Ranchester, which included ranches on Soldier Creek, and Dry Creek; this is where they raised their children; Kenny and Karen. Ramona and Ed lived there until Ed\'s death in 1999 when Ramona then moved to Sheridan where she would live until she passed away.Ramona spent her life raising her kids, sharing her life with others and “leaving her tracks on the earth,” which were deep and will be here forever. She enjoyed jigsaw puzzles which brought everyone together like a magnet to her kitchen table. She spent hours reading and sharing her knowledge of local historical trivia. Her weekends were filled with going to lunch on Saturdays with her best friends, Mary and Laura Shelley who would be seen, “driving the old ladies.” On Sundays you could usually find her dining with her neighbors Elenor and “Aunt” Margaret. Ramona will be remembered by her family as Mom, Grammy and Daw. Ramona held a special place in her heart for all of the caregivers from Sheridan Memorial Hospital and Sugarland. Ramona was preceded in death by her grandparents; John and Margret Zucca, her mother Kathryn Strutzman, her father, Tom Strutzman, and her husband Eddie Kukuchka. She is survived by her son Kenneth (Janelle) Kukuchka and grandchildren Kara (Nic) Bateson, Stacie (Greg) Sonzogni; her daughter Karen ( Rick) Melder and grandchildren Jessica Melder and Max Melder, four great grand children; Kaden, Connor, Blake, and Bryn, and her cousin, Kathy Nyberg.A Celebration of Life for Ramona Jean Kukuchka will be held at Kane Funeral Home at 7:00 p.m. on Wednesday, January 8, 2014, with Ramona\'s God Son, Father Ron Stolcis officiating.In lieu of flowers the family requests that donations be made to the Sheridan County Fulmer Public Library in Ramona\'s name at 335 W. Alger, Sheridan, WY 82801.Kane Funeral Home has been entrusted with arrangements.