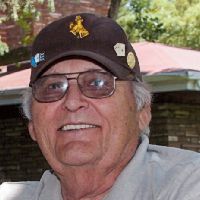 Ray Edward Race, of Dayton, Wyoming, passed away on Monday, April 6, 2015, at Sheridan County Memorial Hospital. He was born on May 14, 1942, in Ovid, Colorado, to parents Edward R. and Viona (Fisbeck) Race.Ray was confirmed in the Lutheran Church in 1956. He graduated from Julesburg High School in 1960. He attended Northeastern Junior College and Colorado State University, graduating in 1965, with an Agriculture Business degree. He returned to Northeastern Colorado to farm with the family. Ray married Sharon Kay Denbo on December 5th, 1969. They had 2 sons, Eric and Edwin. In the spring of 1979, they moved to Dayton and worked for the Padlock Ranch. He continued to work for the Padlock Ranch until he retired. During his retirement, Ray met Audrey Rutan and they enjoyed traveling and spending time together. Audrey, her children and grandchildren, became a big part Ray’s life and he considered them family.Ray enjoyed farming, 4-wheeling, collecting and shooting guns, playing poker and studying the end of times. He attended the Dayton Community Church.Ray was preceded in death by his wife, Sharon, and parents Edward and Viona Race, great-niece, Katarina Race. He is survived by his children; Eric Race, wife Justine of Gillette, WY, and Edwin Race, wife Kellie of Holyoke, CO, siblings; Roger and wife LaDonna Race of Bartlett, NE, Sharon Jorges of Sturgis, SD, and his companion, Audrey Rutan and family, grandchildren; Christopher Race, Jasmine Race, Victoria Race, Kaden Race, and Tanner Race, great-grandchildren Marly Race, Quintin Race and Brody Race, nephews, Mitch and Monte Race and niece Denise Race and families, extended family and friends.Visitation will be held from 2:00 – 4:00 pm on Wednesday, April 8th, 2015, at Kane Funeral Home in Sheridan. Memorial Services will be held at 2:00 pm on Friday, April 10, 2015, at the Dayton Community Church. An Inurnment will follow the service in the Dayton Cemetery.Memorials to honor Ray may be made to Dayton Community Church at 210 Bridge St., Dayton, WY, 82836 or Tongue River High School FFA Program at PO Box 408, Dayton, WY, 82836 .Kane Funeral Home has been entrusted with arrangements.