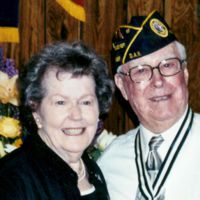 Raymond Albert Brittain, 94, of Sheridan, passed to be with the Lord on Saturday, March 28, 2015, at the Sheridan VA Medical Center. He was born on February 1, 1921, in San Diego, CA to Ray Eugene and Mildred Brittain.Ray enlisted in the U.S. Navy at 18 years old and was aboard the U.S.S. Tennessee moored next to the U.S.S. Arizona in Pearl Harbor on December 7, 1941. After the Japanese attack, Raymond continued to serve throughout the Pacific until 1946. He married his high school sweetheart, Violet Ruth Dalton, in 1942 in Seattle, WA while in port for repairs to his battleship. Ray and Violet were married 69 years when she preceded him in death in February, 2012, in Powell, WY.After the war, the Brittains made their home in the Bakersfield/Delano, CA, area. Ray served as a Kern County sheriff deputy and was the sergeant in charge of the sub-station at Delano for 25 years. They moved to Powell, WY, in 2001, where they became members of the First Southern Baptist Church. Ray was baptized into Christ in Delano in 1965. He had been a life member of the Pearl Harbor Survivors Association, Disabled American Veterans, American Legion and Masons. He supported other organizations such as the National Rifle Association with his time and money.Besides providing for his family faithfully, Ray also created a loving home. He spent many enjoyable days water skiing, camping, deep sea fishing, and hunting with family and friends. They traveled both here and abroad. He felt strongly, that as a proud citizen of this country, we should try and see all of it first before going overseas, and they did.At home he was always building something, taking night classes to learn how to weld or use a lathe to make furniture for Violet. He took enough classes over the years to earn the equivalence of a masters degree in criminology. Ray\'s life was full of love and he savored too much to mention here.He would not want us to grieve too long. He would want us to lift up our hearts and share with him; “God wanted me now and so he has set me free”.Raymond is survived by daughter Constance Lee Brittain of Billings, MT, daughter Corrine Lee Deans and husband Scott of Story, WY, granddaughter Magen Brittain Deans of Story, granddaughter Mariah Marcks White and husband Tim of Billings, MT, great grandchildren Alexis and Lee, children of Mariah.The family would like to thank the staff of the VA Hospital in Sheridan, both the medical unit and the Mountain View Living Center for their kindness and professional care of Raymond during his 2 months there. They made his stay much more tolerable and offered great comfort to the family. Also thank everyone for their thoughts and prayers.No Services to be held at this time.Kane Funeral Home has been entrusted with arrangements.